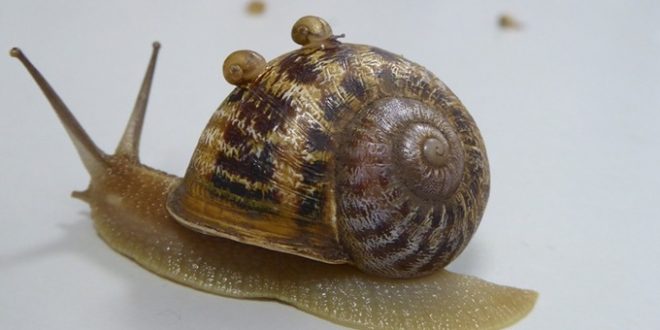 Jeremy the lefty snail loses out to love rival (Photo)

Two rare ‘lefty’ snails brought together following a public appeal by a researcher at The University of Nottingham have produced their first offspring.

More than 170 baby snails have hatched, just six months after the story of Jeremy the ‘lefty’ garden snail and his search for a similarly left-coiling, or sinistral, companion hit international headlines.

Two potential mates were uncovered for Jeremy by a snail enthusiast in Ipswich and a snail farmer in Majorca following the appeal on BBC Radio 4’s Today programme back in October last year by Dr Angus Davison in the University’s School of Life Sciences.

Dr Davison wanted to breed from Jeremy to find out whether the genetics of these rare snails could offer insight into the body asymmetry in other animals, including humans.

But in a tragic twist, Jeremy has been left shell-shocked after being given the cold shoulder by both of his suitors – dubbed Lefty and Tomeu – who instead preferred to mate with each other, and have produced three clutches of eggs between them.

This first batch of eggs to hatch were ‘fathered’ by Lefty and laid by Tomeu in April – snails are hermaphrodites so can fulfil the role of either mother or father.

Their hatching was eagerly anticipated by Dr Davison, who was keen to find out whether the tiny gastropods would follow in the left-coiling footsteps of their parents.

But as the newborns developed it became quickly apparent that in the case of the next generation of these rare creatures two lefts clearly make a right – every single one of the babies has developed with the less rare form of right-coiling, or dextral, shells.

Dr Davison said: “As there has so far been no sign of Jeremy mating with either Lefty or Tomeu, it underlines how incredibly lucky we were to find not just one, but two of these amazingly rare snails following our public appeal.

“Despite not yet being able to mate our original, sinistral snail Jeremy, we have still been able to answer the question of which direction the shells would coil in offspring from two of these rare left-coiling variants. Was it a chance event that made these snails develop as mirror images, or is it inherited?

“The fact that the babies developed right-coiling shells may be because the mother carries both the dominant and recessive versions of the genes that determine shell-coiling direction. Body asymmetry in snails is inherited in a similar way to bird shell colour – only the mother’s genes determine the direction of the twist of the shell, or the colour of a bird egg. It is far more likely that we will get to see left-coiling babies produced in the next generation or even the generation after that.”

Following the original appeal via the national media and a #snaillove hashtag on Twitter, Jeremy became a media sensation, with his story featuring on primetime BBC current affairs and comedy programmes including Have I Got News For You and No Such Thing as the News.

His stardom has led to him being paired with Lefty, whose owner Jade Sanchez Melton heard about the appeal via a member of the Conchological Society of Great Britain and Ireland and Tomeu, who was discovered by snail farmer and snail restaurant owner Miguel Àngel Salom, who spotted the rare ‘lefty’ snail when he was cleaning shells.

Jeremy now has a burgeoning following on his Twitter account (@leftysnail) and his story has even inspired one fan to have a tattoo of the ‘shellebrity’ snail.

Last year, in research published in the journal Current Biology, Dr Davison and colleagues at universities in Edinburgh, Germany and the US, revealed they had discovered a gene that determines whether a snail’s shell twists in a clockwise or anti-clockwise direction.

The same gene also affects body asymmetry in other animals – including humans – and research using these snails could offer the chance to develop our understanding of how organs are placed in the body and why this process can sometimes go wrong when some or all of the major internal organs are reversed from their normal placement.

Two more batches of eggs – another laid by Tomeu and one laid by Lefty and fathered by Tomeu – will soon be hatching.

Lefty has since returned home to Ipswich but Dr Davison is still hopeful that Jeremy may be encouraged to mate with Tomeu – and then plans to mate the resulting offspring from the combination of pairings. In the long term, these crosses may then be used to map and find the genes that determine variation in left-right asymmetry.

Web articles – via partners/network co-ordinators. This website and its contents are the exclusive property of ANGA Media Corporation . We appreciate your feedback and respond to every request. Please fill in the form or send us email to: [email protected]
Previous: Chris Cornell: American rock singer Cornell commits suicide in Detroit
Next: Scientists Reveal Just How Powerful The Tyrannosaurus Rex Bite Really Was