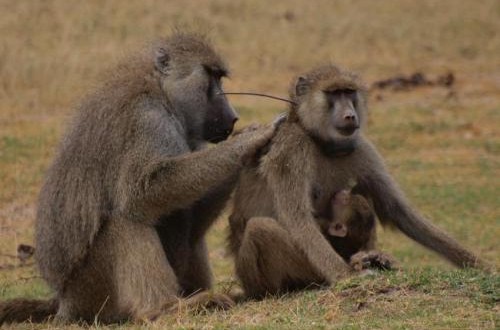 Numerous studies have linked social interaction to improved health and survival in humans, and new research confirms that the same is true for baboons.

Scientists from Duke University studied more than 200 yellow baboon females from the plains of southern Kenya and found that those who were the most sociable – meaning they took part in social grooming more so than their peers – live two to three years longer than their socially isolated counterparts.

A handful of previous studies in baboons, rats and dolphins suggested that same-sex friendships can improve animal health and survival, but this is one of the first studies to show that opposite-sex friendships in animals can have similar effects, said co-author Elizabeth Archie of the University of Notre Dame.

In a study published in Proceedings of the Royal Society B, Archie and four other researchers, including co-authors Susan Alberts and Jenny Tung from Duke University, analyzed 27 years’ worth of near-daily records for yellow baboons living near Mount Kilimanjaro in Kenya.

Baboons take turns grooming each other to make friends and cement social bonds — an activity that involves picking dirt and parasites and dead skin out of each other’s fur.

“Grooming is the baboon equivalent of gossip, or having a good conversation over a cup of coffee,” Alberts said.

The researchers estimated social connectedness for 204 females by measuring how often each engaged in social grooming sessions relative to the rest of the group.

They found that the friendliest females lived two to three years longer than their more socially isolated peers –- an effect that held up even after the researchers accounted for factors such as a female’s rank, group size and number of female relatives.

There are many possible ways that social interactions could improve a baboon’s odds of survival and lengthen her life, Archie and Alberts say, ranging from reducing chronic stress and boosting immune function to improving her access to food and water.

While the primary perks of male-female friendships are thought to be better care and protection for infants and more mating opportunities for males, the results show that females benefit directly too, Archie said.

“Males’ larger size may make them better than females at defending their friends against potential bullies,” Alberts added.

If social connection is so good for survival, why are some baboons less sociable than others? “Forces that aren’t exactly ‘friendly’ might be at play,” said biologist Lauren Brent, a specialist in animal friendships who wasn’t involved with the research.

“If social relationships are a valuable commodity, competition for them should be intense, which could result in social exclusion for some animals,” said Brent, who is currently a research associate at Duke University and the University of Exeter.

“There may also be benefits to being on the periphery, where the risk of disease and the costs of socializing — which can include serious injuries from competing for relationships — are likely to be mitigated.”

Archie and Alberts and their colleagues found that females’ interactions with other females grew less frequent with age, whereas their interactions with males stayed the same. The result sheds light on the social isolation so often experienced by older adults.

“If social isolation is simply an inevitable consequence of age-related declines in health and energy, then we would expect to see similar declines in both same-sex and opposite-sex relationships,” Archie said. But their results suggest otherwise.

“When females get older, many of their female peers start to pass away, and their daughters become tied up with their own infants, leaving less time for social interaction,” Alberts said. “It suggests that social isolation isn’t an inevitable part of aging, but instead may simply be a consequence of declines in potential friends’ availability.”

Whether the most sociable females live longer lives because they have a few close friends or a lot of acquaintances remains an open question, the researchers say.

Their next step is to find out if male-female friendships lengthen lifespan in males, too.

Web articles – via partners/network co-ordinators. This website and its contents are the exclusive property of ANGA Media Corporation . We appreciate your feedback and respond to every request. Please fill in the form or send us email to: [email protected]
Previous: Eating fish may prevent hearing loss in women, Study
Next: Terri-Jean Bedford kicked out of prostitution bill hearing (Video)