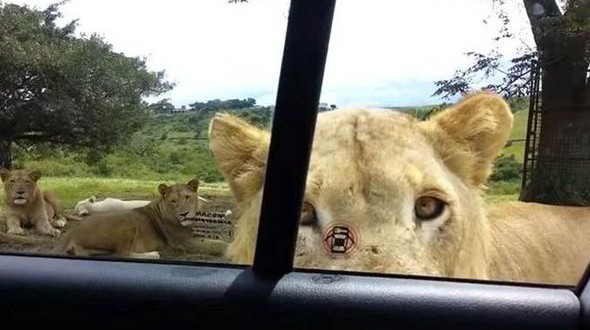 Did you know that lions can open car doors? When you participate in a drive thru safari, the venue normally tells you to keep all windows closed and not to engage with the animals or feed them. Because of this video, they may have to add another rule to the list.

The family were watching a pride of lions from their car when one of the majestic beats strolled over – and opened the car door with its TEETH.

The unbelievable moment was captured on film – and depicts the passengers watching the wild cat as it presses its face against the window.

But their joy soon turned to terror when the giant beast prised the door open with just its large gnashers.

Thankfully one of the family members swiftly grabbed hold of the door and slammed it shut before locking it.

A female voice was heard saying: “Oh my gosh, I didn’t know they could do that.”

The terrifying incident took place on a safari adventure in South Africa early last year but was only recently discovered after it was uploaded to Reddit.

Joshua Sutherland, who originally uploaded the one minute 12 second clip to YouTube last March, wrote: “Did you know lions could open car doors?

“My sister Kaylene & Cindy visiting our parents, who are serving a mission in South Africa, had an experience of a lifetime. [sic]”

Some users were quick to speculate on how the lions managed to open the door.

One said: “It’s natural for the lions to test things in there mouth [sic], and the instinct is to ‘pull away’, like when they eviscerate something.”

Another added: “I would have died. I know this because the very first thought that came to my mind was ‘f***!’.”

Web articles – via partners/network co-ordinators. This website and its contents are the exclusive property of ANGA Media Corporation . We appreciate your feedback and respond to every request. Please fill in the form or send us email to: [email protected]
Previous: Parking Lot Fight – Video: 71-year-old woman hospitalized after fight over handicapped spot at Walmart
Next: Envelopes with white powder sent to federal cabinet ministers : Police