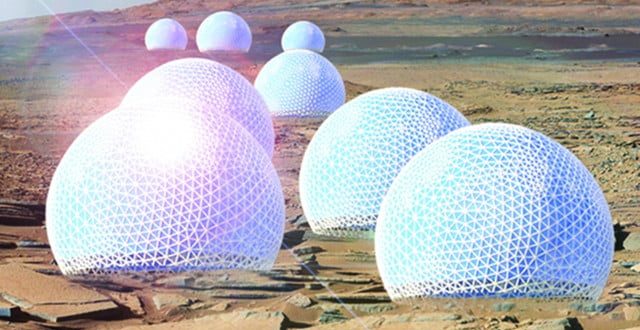 Mars city living: Your bedroom will look a lot different

Mars city living: Your bedroom will look a lot different

It’s hard to say exactly how humans will live on Mars, if and when we occupy the planet. Maybe we’ll burrow in lava tubes. Maybe we’ll reside in giant greenhouses. However their shelters end up, the Red Planet’s first residents will be a long way from Earth (around nine months and 140 million miles on average), so they’ll have to sustain themselves without a whole lot of intervention.

Now we have a vision of what life on Mars might look like, thanks to a team of urban designers at the Massachusetts Institute of Technology, whose “Redwood Forest” habitats won the Mars City Design 2017 in architecture.

MIT’s winning urban design, titled Redwood Forest, creates domes or tree habitats that can each house up to 50 people. The domes provide open, public spaces containing plants and abundant water, which would be harvested from the northern plains of Mars. The tree habitats sit atop a network of underground tunnels, or roots, providing access to private spaces and easy, shirt-sleeve transportation to the other tree habitants in the community of 10,000. In addition to connectivity, the roots offer residents protection from cosmic radiation, micrometeorite impacts, and extreme thermal variations.

Sumini describes the project’s design fundamentals and forest metaphor: “On Mars, our city will physically and functionally mimic a forest, using local Martian resources such as ice and water, regolith (or soil), and sun to support life. Designing a forest also symbolizes the potential for outward growth as nature spreads across the Martian landscape. Each tree habitat incorporates a branching structural system and an inflated membrane enclosure, anchored by tunneling roots. The design of a habitat can be generated using a computational form-finding and structural optimization workflow developed by the team. The design workflow is parametric, which means that each habitat is unique and contributes to a diverse forest of urban spaces.”

The team aims to build a comfortable environment for inhabitants while using location and system architecture focused on sustainability, a critical component for any Mars community.

Department of Aeronautics and Astronautics doctoral student and Systems Design and Management Fellow George Lordos MBA ’00, who was responsible for the system architecture of Redwood Forest, pointed out the central role of water in building vibrant communities on Mars:

“Every tree habitat in Redwood Forest will collect energy from the sun and use it to process and transport the water throughout the tree, and every tree is designed as a water-rich environment,” says Lordos. “Water fills the soft cells inside the dome providing protection from radiation, helps manage heat loads, and supplies hydroponic farms for growing fish and greens. Solar panels produce energy to split the stored water for the production of rocket fuel, oxygen, and for charging hydrogen fuel cells, which are necessary to power long-range vehicles as well as provide backup energy storage in case of dust storms.”

Many of the features of the design could be also useful on Earth, the designers say. Electric vehicles traveling in underground multi-level networks could help ease congested American cities. The tree habitat design could create living and working spaces in harsh environments, such as high latitudes, deserts and the sea floor. Hydroponic gardening beneath cities could provide fresh fish, fruits, and vegetables with lower land and transportation costs.

Web articles – via partners/network co-ordinators. This website and its contents are the exclusive property of ANGA Media Corporation . We appreciate your feedback and respond to every request. Please fill in the form or send us email to: [email protected]
Previous: Powering Saturn’s Active Ocean Moon, says new research
Next: Sleep deprivation like alcohol, says new study