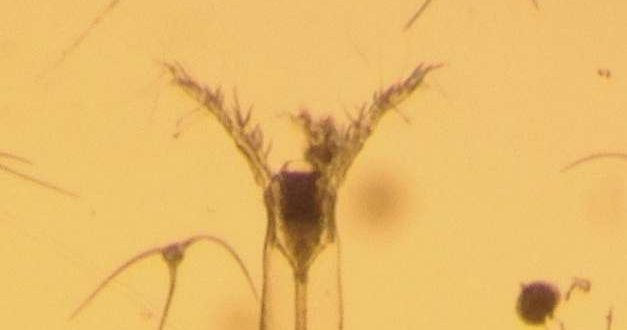 A new species of monstrilloid copepod, Monstrillopsis planifrons sp. n., is described from an adult female that was collected beneath snow-covered sea ice during the 2014 Ice Covered Ecosystem – CAMbridge bay Process Study (ICE-CAMPS) in Dease Strait of the Canadian Arctic Archipelago.

Aurelie Delaforge did not purposefully seek this monster out in Cambridge Bay, Nunavut. But she found it, and now Canada’s arctic biodiversity includes a new copepod of the Monstrilloida family, derived from the word “monster”. There are more than 160 different Monstrilloida zooplankton floating around the oceans, and now Canada’s Arctic has a species of its own. Happy Halloween.

This discovery came thanks to two noteworthy coincidences. One, Delaforge studied the taxonomy of small ocean animals and plants for her masters back home in France and so knew enough to recognize the oddity. Two, while living on an ice camp in Canada’s high arctic, she was sampling the ocean to support her PhD thesis on what causes plankton blooms under the sea ice, and she took the samples during the short two-month window these animals take adult form—May and June. Outside of these months, the animal would be nearly invisible as larvae or busy living as a parasite inside animals like clams and sponges. But by luck, the creature kept showing up in her samples, suggesting it didn’t just drift over from somewhere else. It was local.

After returning to her lab at the U of M, Delaforge sent a text to a Department of Fisheries and Oceans researcher, Wojciech Walkusz: “I have this alien!!!” He immediately suspected it was a Monstrilloida so she sent her specimen to Mexico where the world’s foremost monster identification specialist resides. Eduardo Suárez-Morales dissected the tiny creature and confirmed the Canadian Arctic’s first, true monster: Monstrillopsis planifrons, or flat headed monster.

Delaforge and her colleagues published their discovery, “A new species of Monstrillopsis (Copepoda, Monstrilloida) from the lower Northwest Passage of the Canadian Arctic”, in the latest edition of the ZooKeys journal.

“When we study the Arctic, there are still things we don’t know. This is a good example,” Delaforge says. “I find this pretty cool. It’s not an everyday thing, discovering new species and it feels incredible. I wasn’t looking to find a new species for my PhD, but for me personally, who loves taxonomy, I think this is really important because it brings new information on the biodiversity present in the Arctic. It’s important to know what’s there.”

Delaforge is a PhD student in the Clayton H. Riddell Faculty of Environment, Earth, and Resources at the University of Manitoba. Her work through the U of M’s Centre for Earth Observation Science is supervised by associate professor, C.J. Mundy.

Web articles – via partners/network co-ordinators. This website and its contents are the exclusive property of ANGA Media Corporation . We appreciate your feedback and respond to every request. Please fill in the form or send us email to: [email protected]
Previous: Innate Social Behaviors in the Mouse Brain, Says New Study
Next: Intermittent fasting may help fight obesity, says new research