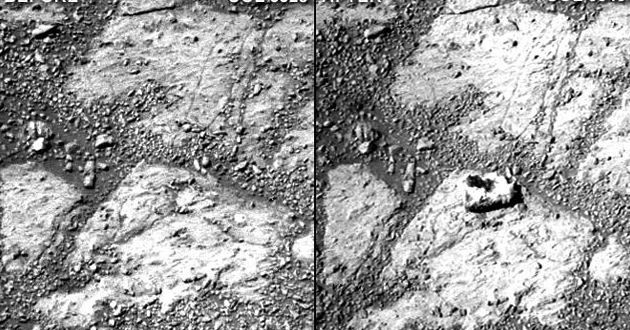 A mysterious rock has suddenly appeared in front of the Mars rover Opportunity, but where could it possibly have come from?

On Sol 3528, the Mars rover Opportunity captured an image of a small segment of the Martian surface. Twelve days later, on Sol 3540, a second image of the same area was taken – and this one was different. A rock, about the size of a jelly donut, had suddenly appeared in front of the rover.

“It was a total surprise,” said lead scientist Steve Squyres in an interview with Discovery News. “We were like, ‘wait a second, that wasn’t there before, it can’t be right. Oh my god! It wasn’t there before!’ We were absolutely startled.” The scientists then gave the rock a name, “Pinnacle Island.”

Assuming they’re not the victims of a Martian prank, JPL scientists have two plausible ideas on the rock’s unknown origin. The rock could have been flipped over during one of Opportunity’s maneuvers. The second (and less likely) conclusion is that a nearby meteorite sent Pinnacle Island spiraling into the rover’s path.

However, the rock’s origin story isn’t the only thing that has the JPL team excited. “[The rock] obligingly turned upside down,” said Squyres. “We’re seeing a side that hasn’t seen the Martian atmosphere in billions of years, and there it is for us to investigate. It’s just a stroke of luck.”

Opportunity continues to be an example in fortitude. Originally scheduled for a 3-month mission, the little rover is still trucking a decade later and has clocked nearly 23 miles in its journey. This rock could represent Opportunity’s last Martian mystery, but for now, it’s still searching.

Web articles – via partners/network co-ordinators. This website and its contents are the exclusive property of ANGA Media Corporation . We appreciate your feedback and respond to every request. Please fill in the form or send us email to: [email protected]
Previous: No Oklahoma JC Penney Closing 33 Stores
Next: Vladimir Putin to Gays: ‘Leave the Children in Peace’