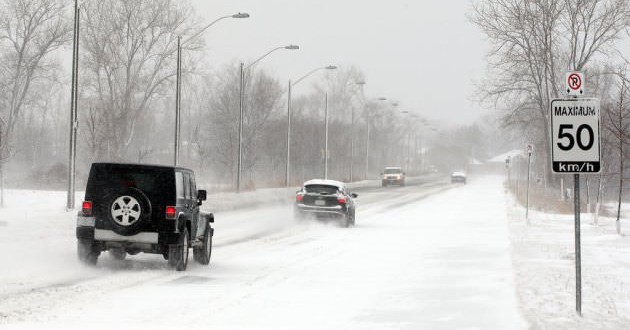 The Old Farmer’s Almanac has revealed its predictions for Canada’s upcoming winter season, and it’s not great news.

After last winter’s seemingly never-ending wickedly cold weather, residents in much of the country can expect more of the same in the coming months.

“We’re looking at the T-Rex of winters,” Jack Burnett, editor of the Old Farmer’s Almanac, said on CTV’s Canada AM on Thursday.

A long-range weather forecast for the Prairies shows that winter will be “colder than normal” with above average snowfall. April and May will also see unseasonally cold weather.

The mercury could fall below normal in Southern Ontario. Compared to last year’s horrid winter, less snowfall is projected for southwest Ontario, though it will be above normal levels elsewhere, the Almanac said.

The Almanac’s forecast for Ontario is consistent with that of Accuweather, which predicted a cooler-than-normal winter due to an El Nino system.

Temperatures could also be cooler in the Maritimes.

However, the winter weather forecast brings plenty of good news for southern B.C. with higher than average winter temperatures.

A warmer, but wetter winter is on order for southern Quebec.

Web articles – via partners/network co-ordinators. This website and its contents are the exclusive property of ANGA Media Corporation . We appreciate your feedback and respond to every request. Please fill in the form or send us email to: [email protected]
Previous: Jens Voigt sets new hour record
Next: Costco Stores will no longer accept AMEX in Canada