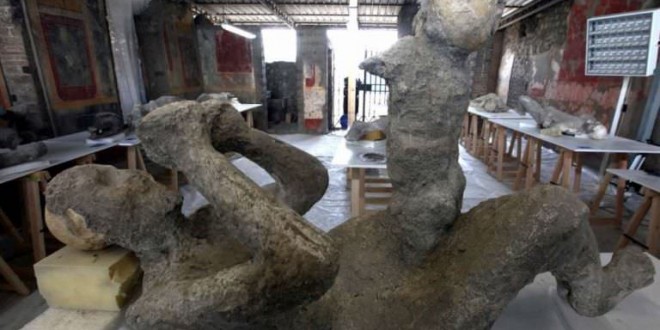 A terrified mother and child’s final moments after the devastating Pompeii volcano have been unearthed for the first time in 1,900 years.

It’s been nearly 2,000 years since the deadly Pompeii disaster but one of its most tragic stories is just being fully revealed.

Through plaster casts experts have managed to show the devastating scene of a ‘scared boy on his mother’s lap’.

It is thought the child, who was around four, had run to his mother as Mount Vesuvius erupted and covered the Roman town in ash in 79 AD.

The substance had preserved the skeletons.

‘It can be very moving handling these remains when we apply the plaster,’ conservator Stefania Giudice told journalist Natashas Sheldon.

The expert from Naples national archaeological Museum added: ‘Even though it happened 2,000 years ago, it could be a boy, a mother or a family. It’s human archaeology, not just archaeology.’

The scene, which was made even more tragic by the presence of the boy’s ‘father and sibling’, is part of restoration work and the study of 86 casts in the laboratory of Pompeii Archaeological Site.

Web articles – via partners/network co-ordinators. This website and its contents are the exclusive property of ANGA Media Corporation . We appreciate your feedback and respond to every request. Please fill in the form or send us email to: [email protected]
Previous: Annegret Raunigk : German Woman, 65, Gives Birth to Quadruplets
Next: Thomas Sancomb : Milwaukee man pronounced dead, then moves limbs (Video)