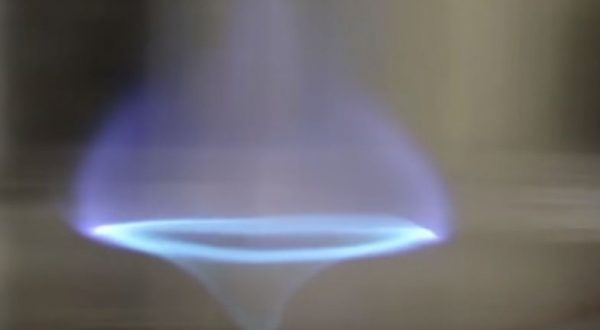 Researchers have discovered a brand-new, bright-blue fire tornado that behaves unlike any flame ever created.

The blue fire was given the name “blue whirl” by researchers at the University of Maryland’s A. James Clark School of Engineering that discovered it. Researchers said this previously unobserved flame phenomenon evolves from typical yellow fire whirls, but are smaller, very stable and completely blue, indicating soot-free burning.

“Blue whirls evolve from traditional yellow fire whirls. The yellow color is due to radiating soot particles, which form when there is not enough oxygen to burn the fuel completely,” said Elaine Oran, Glenn L. Martin Institute Professor of Engineering and co-author of the paper. “Blue in the whirl indicates there is enough oxygen for complete combustion, which means less or no soot, and is therefore a cleaner burn.”

The Clark School team initially set out to investigate the combustion and burning dynamics of fire whirls on water. What they discovered was a novel, swirling blue flame that they say could help meet the growing worldwide demand for high-efficiency, low-emission combustion.

“A fire tornado has long been seen as this incredibly scary, destructive thing. But, like electricity, can you harness it for good? If we can understand it, then maybe we can control and use it,” said Michael Gollner, assistant professor of fire protection engineering and co-author of the paper.

“This is the first time fire whirls have been studied for their practical applications,” Gollner added.

Some oil spill remediation techniques include corralling up the crude oil to create a thick layer on the water surface that can be burned in place, but the resulting combustion is smoky, inefficient, and incomplete. However, the Clark School researchers say blue whirls could improve remediation-by-combustion approaches by burning the oil layer with increased efficiency, reducing harmful emissions into the atmosphere around it and the ocean beneath it.

“Fire whirls are more efficient than other forms of combustion because they produce drastically increased heating to the surface of fuels, allowing them to burn faster and more completely. In our experiments over water, we’ve seen how the circulation fire whirls generate also helps to pull in fuels. If we can achieve a state akin to the blue whirl at larger scale, we can further reduce airborne emissions for a much cleaner means of spill cleanup,” explained Gollner.

Beyond improvements to fuel efficiency and oil spill remediation, there are currently few easy methods to generate a stable vortex in the lab, so the team hopes their discovery of the ‘blue swirl’ can serve as a natural research platform for the future study of vortices and vortex breakdown in fluid mechanics.

“A fire whirl is usually turbulent, but this blue whirl is very quiet and stable without visible or audible signs of turbulence,” said Huahua Xiao, assistant research scientist in the Clark School’s Department of Aerospace Engineering and corresponding author of the paper. “It’s really a very exciting discovery that offers important possibilities both within and outside of the research lab.”

The paper, “From fire whirls to blue whirls and combustion with reduced pollution,” Huahua Xiao, Michael J. Gollner, and Elaine S. Oran, was published August 4, 2016, in the journal Proceedings of the National Academy of Sciences (PNAS).

Web articles – via partners/network co-ordinators. This website and its contents are the exclusive property of ANGA Media Corporation . We appreciate your feedback and respond to every request. Please fill in the form or send us email to: [email protected]
Previous: Granby Zoo: Lion mauls employee, quick action saves her life
Next: Emerald Ash Borer Has Arrived In Philadelphia, Deadly To Ash Trees