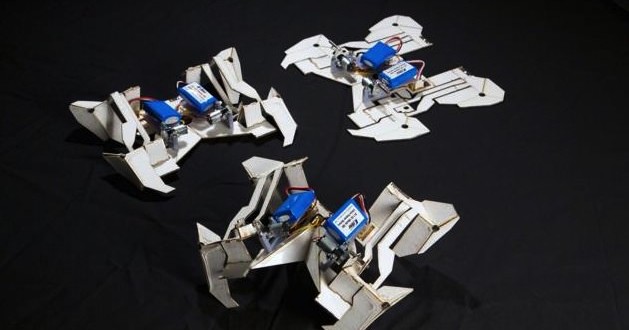 A team of researchers from the Cambridge-MIT Institute has developed a robot that can assemble itself in a method that resembles the art of origami. The material used to construct this machine is comprised of the same polymer found in Shrinky Dink toys, which shrink when exposed to high temperatures.

According to the researchers, the invention expands the scope of ways to quickly and inexpensively manufacture robots that can interact with the environment and automate much of the design and assembly process. The researchers explained their latest development in a study published in the journal Science on Thursday, saying that the newly developed robots have potential for more sophisticated applications, such as space research.

“Imagine a ream of dozens of robotic satellites sandwiched together so that they could be sent up to space and then assemble themselves remotely once they get there. They could take images, collect data, and more,” Sam Felton, a doctoral student at the Harvard School of Engineering and Applied Sciences and the study’s lead author, said in a statement.

The robot has five layers of material that are cut according to digital specifications by a laser cutter. The middle layer is copper, which is fixed into a complex network of electrical leads and is squeezed in between two structural layers of paper. The external layers are made of a shape-memory polymer, a material that has the ability to fold when heated.

After the laser-cut materials are layered together, a microprocessor and one or more small motors are attached to the top surface. Each motor, synchronized by the microprocessor, controls two of the robot’s legs with eight mechanical “linkages,” each to convert the force applied by the motor into movement.

The new design, the researchers said, was inspired by Origami, an ancient Japanese art of folding a single sheet of paper into complex designs. This approach helped them avoid the traditional “nuts and bolts” process used to assemble machines, the researchers said, adding that each Origami robot costs about $100 to make, while the body, minus the motors, batteries and microprocessor, costs only $20.

Origami robotics is “a pretty powerful concept, because cutting planar things and folding is an inherently very low-cost process,” Ronald Fearing, a professor of electrical engineering and computer science at the University of California at Berkeley, said in a statement. “If you have a hollow-shell structure, then you have something that is very strong and very lightweight. If you put motors on there, you end up with a robot that is very powerful for its weight.”

Web articles – via partners/network co-ordinators. This website and its contents are the exclusive property of ANGA Media Corporation . We appreciate your feedback and respond to every request. Please fill in the form or send us email to: [email protected]
Previous: Weight loss does not make people happy, Study Finds
Next: Manitoba cat with bug catcher on head is caught safe