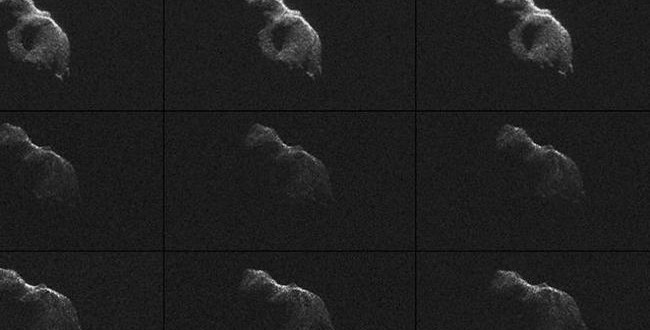 Researchers Obtain Highest-Resolution Views Ever of a Near-Earth Asteroid

Researchers Obtain Highest-Resolution Views Ever of a Near-Earth Asteroid

NASA Researchers using Earth-based radar have produced sharp images of a recently discovered asteroid as it moved silently past our planet.

Captured on Sunday, the views of the asteroid designated “2014 HQ-124″ are some of the most detailed radar images of a near-Earth asteroid ever obtained.

The irregular-shaped asteroid, named “2014 HQ124,” is at least 1,200 feet long, and came within 776,000 miles of Earth on Sunday, which is just a bit farther away than three times the distance to the moon. The 21 radar images were captured by Jet Propulsion Laboratory researchers over 4 1/2 hours, and the asteroid was rotating at a rate of about once in just less than 24 hours.

The asteroid was originally discovered on April 23 by NASA’s NEOWISE, a space telescope that scouts the skies for asteroids and comets.

Web articles – via partners/network co-ordinators. This website and its contents are the exclusive property of ANGA Media Corporation . We appreciate your feedback and respond to every request. Please fill in the form or send us email to: [email protected]
Previous: US – FDA : Enanta drug part of hepatitis C priority review
Next: Samsung launches iPad Air killer Galaxy Tab S with WQHD resolution, Report