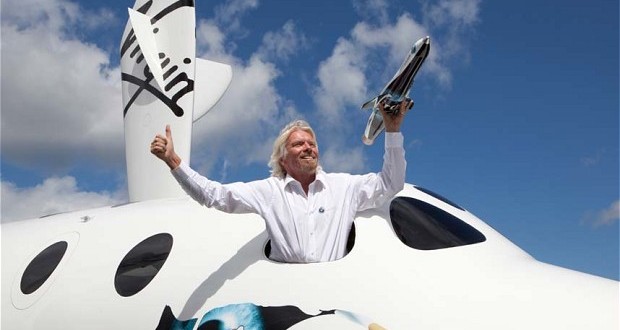 Virgin Group founder Richard Branson announced on Friday that the NBC television network will be tracking preparations and will broadcast the inaugural flight of his Virgin Galactic SpaceShip Two rocket plane into space.

If tests and plans go according to schedule, Branson and his two children, Holly, 31 and Sam, 28, could blast off into space from New Mexico next August, which will be aired live on NBC.

“We are delighted that we are going to be working with you,” Branson, 63, told Matt Lauer and Savannah Guthrie, the hosts of NBC television’s “Today” morning show.

“It is going to be an incredibly exciting year,” he said.

NBC plans to air a special program the night before the launch, and Lauer and Guthrie will host a three-hour live event when it takes off.

“We are very, very happy to be part of this project,” Lauer said, adding NBC will be a part of the entire process.

The British self-made billionaire said the aircraft has already broken the sound barrier in tests and he expects by early next year to do a test flight to the edge of space.

He and his children will be the first passengers on the aircraft that will have two pilots and a total of six passengers. The other passengers have not yet been announced.

Nearly 700 people, including actor Leonardo DiCaprio and physicist Stephen Hawking, have signed up for the flights, which will cost up to $250,000.

“I think most people in this world would love the chance to go to space if they could afford it and if we could guarantee them a return ticket,” Branson said.

Space travel is the latest adventure for Branson, one of the world’s most famous businessmen and entrepreneurs whose business empire ranges from airlines to mobiles phones. He has attempted to fly around the world in a hot air balloon and to speed across the Atlantic Ocean in a power boat.

Branson has an estimated net worth of $4.6 billion and is Britain’s sixth-richest resident, according to business magazine Forbes.

He has recently come under fire, however, after it emerged he was living full-time on Necker Island in the British Virgin Islands, which was uninhabited when he bought it in 1979. Being a resident there means he can avoid Britain’s 50% income tax rate on high earners as well as capital gains tax, but it does limit the time he can spend each year in the UK.

A study commissioned by the U.S. and Florida governments has estimated that in their first decade of operations, commercial suborbital spaceflights could bring in between $600 million and $1.6 billion in revenue, with tourism driving about 80% of the demand.

Web articles – via partners/network co-ordinators. This website and its contents are the exclusive property of ANGA Media Corporation . We appreciate your feedback and respond to every request. Please fill in the form or send us email to: [email protected]
Previous: Paranormal Activity: The Marked Ones (2014 movies)
Next: Roman Abramovich Installs Anti-paparazzi laser Photo Shield on World’s Largest Yacht