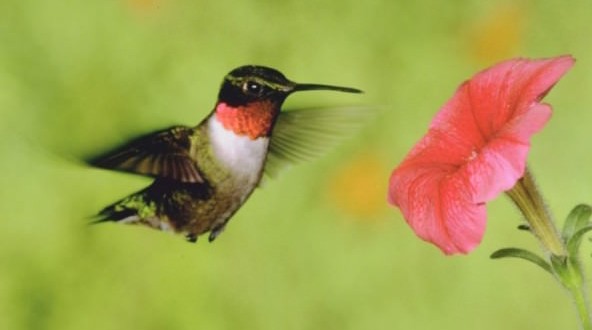 Hummingbirds are known for their ability to flit and fly, hovering in place before darting away to a different location. Now, researchers have taken a closer look at a hummingbird’s ability to hover and have found that it hinges on the fact that the tiny bird has a completely stationary visual field.

In a laboratory flight arena, hummingbirds hovered around a plastic feeder while images were projected on a surface behind the feeder.

The hummingbird’s near 360-degree peripheral vision gives it a big viewing window around the feeder and its reaction to projected moving images surprised the researchers. Images like a rotating spiral caused the hummingbirds to falter in-flight, repeatedly drifting backward, drawing their beaks away from the feeder.

The researchers repeated the experiment and the birds could not get used to moving images.

The researchers noted that once the hummingbird’s beak broke contact with the feeder, its brain did a sort of re-boot. The bird would come back to its original hovering and feeding position only to be disrupted again.

The birds had no visible response when still images were projected.

The researchers say their work points to a possible stabilization reflex triggered by the hummingbirds’ visual processing network that kicks in once the bird attempts to hover.

“Despite the urge to feed, the birds seemed unable to adapt to the moving images,” said UBC zoology researcher Benny Goller.

“It suggests the hummingbirds’ visual motion detection network can over-ride even a critical behavior like feeding.”

The researchers are hopeful that their findings will open further investigation of how visual information is used by flying birds, both in the brain and during free behavior.

The research was published in the Proceedings of the National Academy of Sciences on December 8.

Web articles – via partners/network co-ordinators. This website and its contents are the exclusive property of ANGA Media Corporation . We appreciate your feedback and respond to every request. Please fill in the form or send us email to: [email protected]
Previous: Winnipeg : Additional 30-km/h zones in store for city
Next: Detroit Lions Fan Spots Man’s Pregnant Girlfiend Cheating Over Text. Was He Right To Intervene?