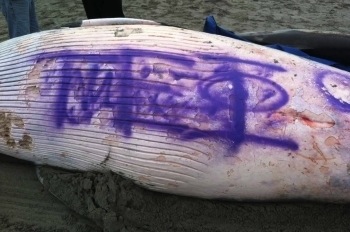 Experts say the illness behind the massive dolphin die-off here at the Jersey Shore, and along the East Coast last year, is infecting other animals.

Officials with the Marine Mammal Stranding Center say the Minke whale that was found washed up on an Atlantic City Beach last month tested positive for the Morbilli virus.

Officials told NBC 40 that it is rare to find the Morbilli virus in large whales. They are waiting for test results for two Bottlenose dolphins that recently washed up dead. The report does not indicate where these dolphins were found.

Officials are still investigating the graffiti found on the beached whale, which washed ashore May 1. According to earlier reports, the graffiti was said to be Greek letters from the Tau Epsilon Phi fraternity.

A spokesman for the fraternity released the following statement May 2:

On May 1, 2014, the letters of Tau Epsilon Phi appear to have been used in a reprehensible act in which a deceased whale was vandalized in Atlantic City. While we don’t know if any of our members were involved, we have been in contact with the authorities and have offered our assistance in their investigations. This act is in direct contradiction with our mission statement and our teachings of friendship, chivalry and service, and we wholeheartedly condemn it.

The investigation is ongoing.

Web articles – via partners/network co-ordinators. This website and its contents are the exclusive property of ANGA Media Corporation . We appreciate your feedback and respond to every request. Please fill in the form or send us email to: [email protected]
Previous: Health Canada : Cancer drug maker’s licence reinstated
Next: Astronauts play football in zero gravity on ISS (Video)