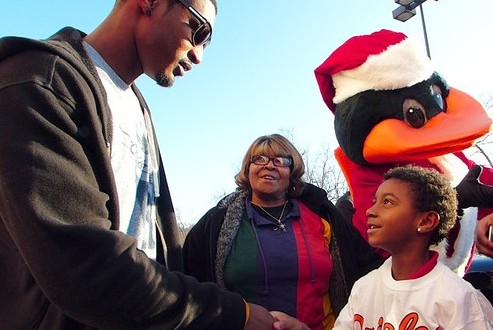 Orioles center fielder Adam Jones, who has been involved in various charity initiatives in Baltimore and his hometown of San Diego, has been named the club’s nominee for this year’s Roberto Clemente Award.

The award is presented annually at the World Series to one big leaguer who has demonstrated a high level of character and meritorious community service, emulating the example set by Clemente, the Hall of Fame Pittsburgh Pirates outfielder who died in a plane crash while attempting to help earthquake victims in Nicaragua.

Jones also was chosen to represent the Orioles for the Marvin Miller Man of the Year Award, but he didn’t make the final cut. The six remaining nominees are Carlos Beltran, Adrian Gonzalez, Raul Ibanez, Mariano Rivera, Nick Swisher and Chase Utley.

Web articles – via partners/network co-ordinators. This website and its contents are the exclusive property of ANGA Media Corporation . We appreciate your feedback and respond to every request. Please fill in the form or send us email to: [email protected]
Previous: Kelly Clarkson : Singer visits children’s hospital in Vanderbilt
Next: Johnny depp : pirates of the caribbean 5 Delayed, Reports