Home » Sports » Aly Raisman in ESPN’s Body Issue: “Everything I put into my body is for gymnastics” (Video) 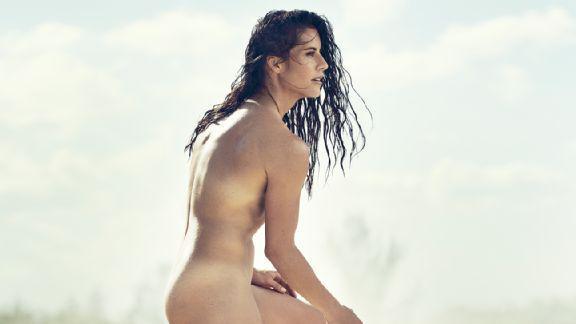 Aly Raisman in ESPN's Body Issue: 'Everything I put into my body is for gymnastics'

Aly Raisman in ESPN’s Body Issue: “Everything I put into my body is for gymnastics” (Video)

Gymnast Aly Raisman bares all as the cover girl for ESPN’s latest, the “Body Issue.” The Olympic gold medalist appears fully nude in an ESPN video, discussing her passion for gymnastics, her intense regimen and the sport that inspires and challenges her.

The 21-year-old gymnast tells the mag she was worn out after the Olympics, and is undecided about competing in Rio at next summer’s games. “Every day is a challenge,” she says. “Even though at the 2012 Olympics we were so happy to win the gold medal, every day is not like that. I think people don’t understand that; people don’t see that side of the sport — the frustration, how much it takes a toll on your body, and mentally as well.”

About her 5-foot-2, 115-pound frame, Raisman says, “Instead of being insecure about my muscles, I’ve learned to love them. I don’t even think of it as a flaw anymore because it’s made me into the athlete that I am. I think imperfection is beauty.” Now in its seventh year, the Body Issue has featured a slew of buff sportos in their birthday suits, including Venus Williams, Michael Phelps, Marshawn Lynch, Candace Parker, Blake Griffin, and Apolo Anton Ohno.

Web articles – via partners/network co-ordinators. This website and its contents are the exclusive property of ANGA Media Corporation . We appreciate your feedback and respond to every request. Please fill in the form or send us email to: [email protected]
Previous: ‘Piano Man’ Billy Joel Marries Alexis Roderick in Surprise Wedding at His Estate
Next: Red Lane : Merle Haggard Songwriter Dies At Age 76