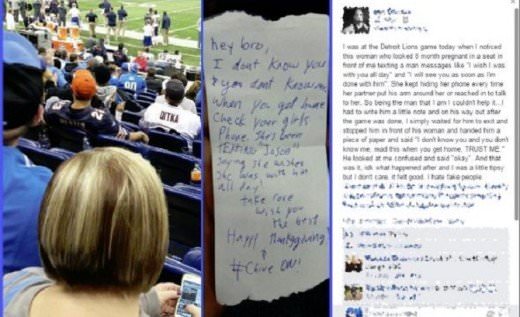 A Detroit Lions fan reportedly spotted a woman cheating on her boyfriend on Thanksgiving and decided to reveal this to the guy. How did he do this, you ask?

During a Thanksgiving game between the Chicago Bears and Detroit Lions, a man says he noticed a couple sitting in front of him: the woman, who appeared to be pregnant, he said, was texting another man, named “Jason,” talking about how much she wanted to be with him.

According to Mad World News, the man claims the woman shut or hid her phone whenever her significant other turned his head. So he wrote a note to the other man, and gave it to him, saying “I don’t know you and you don’t know me, read this when you get home, trust me,” an exchange he reportedly described on Facebook.

Images of the note have since gone viral, with popular social media channel reddit featuring the photo.

“Hey bro, I don’t know you and you don’t know me,” the note reads. “When you get home check your girls phone. She’s been texting “Jason” saying she wishes she had been with him all day! Take care wish you the best Happy Thanksgiving and #Chive On!”

It’s not known what became of the couple after that.

Web articles – via partners/network co-ordinators. This website and its contents are the exclusive property of ANGA Media Corporation . We appreciate your feedback and respond to every request. Please fill in the form or send us email to: [email protected]
Previous: Scientists find fault in hummingbirds’ hovering abilities
Next: 35 years in soda death : Couple sentenced in death of their 5-year-old daughter