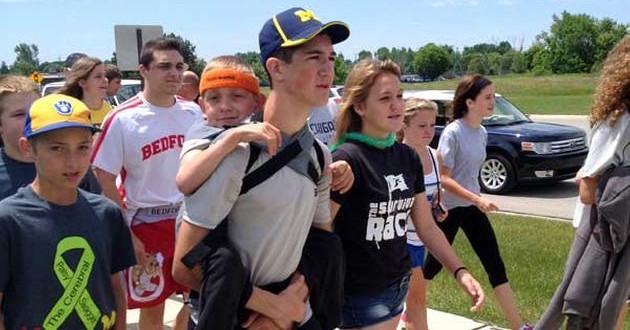 Hunter Gandee : Teen walking 57-miles with brother on back

Hunter Gandee : Teen walking 57-miles with brother on back (Video)

Hunter Gandee wasn’t worried as much about the 56-plus miles left to travel as he was about his next step.

Hunter Gandee expected to complete about 15 miles by Friday evening after starting from Lambertville in southeastern Michigan’s Monroe County.

By 5 p.m. the pair, followed by family and friends, had reached Ida in Monroe County. They planned to spend the night at a campground in Dundee. They are expected to reach Ann Arbor on Sunday.

Braden is in a harness on Hunter’s back.

“It’s been tough, but it’s not as hard — so far — as it will be in the coming days,” Hunter told The Associated Press from the road. “As we add on more miles, it’s going to wear on us more, but we are prepared this time.”

Hunter was 14 last June when he carried then-7-year-old Braden on his back for two days.

Cerebral palsy prevents Braden from walking without assistance. They traveled last year from their hometown of Temperance to Ann Arbor.

This year’s “Cerebral Palsy Swagger” started Friday at CP Swagger Shipyard, a playground they raised money for at Braden’s elementary school in Lambertville.

Members of Hunter’s wrestling and football teams joined them.

The family said it is an awareness project, not a fundraiser.

“We want to spread the story about what we’re doing and what they can do for people who have cerebral palsy,” Hunter said. “These are normal people and they are just trying to live their lives, too.”

Web articles – via partners/network co-ordinators. This website and its contents are the exclusive property of ANGA Media Corporation . We appreciate your feedback and respond to every request. Please fill in the form or send us email to: [email protected]
Previous: Bus Driver Saves Boy Kidnapped From Milpitas Library, Police
Next: Female body in Winnipeg identified after three years