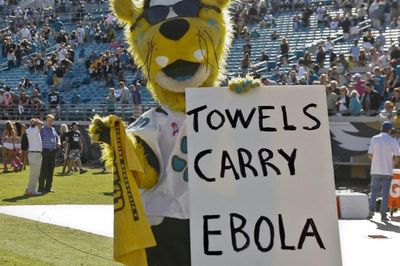 Jacksonville took on the Steelers on Sunday, and the Jaguars mascot made the poor choice to make an unfunny “joke” about Ebola.

“Towels Carry Ebola” was clearly a joke about the Steelers’ iconic ‘terrible towels’. The Jaguars lost 17-9 to the Steelers at EverBank Field Sunday.

The joke apparently didn’t go over well with some, given the Ebola is such a sensitive topic around the world right now.

Web articles – via partners/network co-ordinators. This website and its contents are the exclusive property of ANGA Media Corporation . We appreciate your feedback and respond to every request. Please fill in the form or send us email to: [email protected]
Previous: Marcus Peter Volke : Chef cooks parts girlfriend’s body (Video)
Next: Toxic tea : Utah woman drinking tea laced with chemicals at restaurant