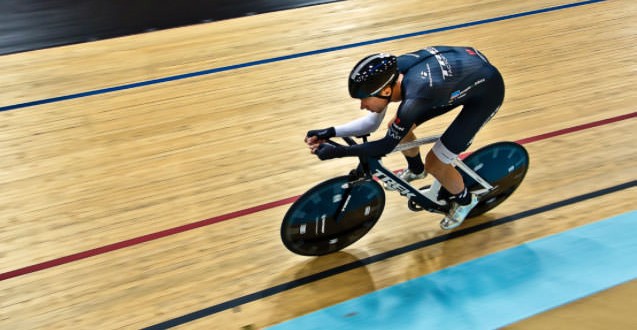 Jens Voigt, who will now retire from cycling, said afterwards: “I’m so happy. Maybe I started a little bit too fast out there and I had to slow down after 20 minutes just to get in the right zone. Then in the last 20 minutes I still had a lot in the tank and I thought, ‘I’m going to give everything’.

“Now I’m on the list [of record-holders] – nobody is going to strike me off it. To be up there with the likes of Merckx, Boardman, Indurain, I’m now proud that my name is with them.

“It’s among the biggest highlights of my career. Now I can take the plane back home and there’s some pizza waiting for me.”

Jens Voigt had been expecting to cover 50.5km and made a strong start, quickly settling into his rhythm and posting lap times in the high 17 seconds.

He slowed in the middle 20 minutes and there was a moment of concern when he climbed out of his saddle and readjusted his skinsuit, but he then began speeding back up and looked like he had energy left over at the finish.

“Our strategy was quite conservative,” Voigt added. “I quickly got ahead and I knew I could stay ahead, but going over 51km is much faster than I expected. I’m really satisfied.”

Voigt’s achievement is expected to open the door for fresh attempts in the near future, with Sir Bradley Wiggins and Fabian Cancellara among the riders to have expressed an interest.

Web articles – via partners/network co-ordinators. This website and its contents are the exclusive property of ANGA Media Corporation . We appreciate your feedback and respond to every request. Please fill in the form or send us email to: [email protected]
Previous: Kristy Kelley : Missing mom found dead
Next: Old Farmer’s Almanac: Colder, drier winter ahead, Report