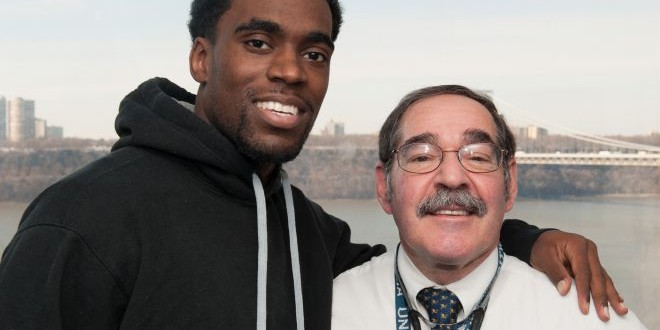 Sore as the incision from his kidney transplant surgery might still be, Donald Jones’ outlook on life is suddenly fresh.

Though Jones’ NFL career is over, what matters more to the former Buffalo Bills receiver is knowing he has a father willing to sacrifice anything — even a kidney. And that leaves Jones, who turns 26 on Tuesday, thankful for a second chance.

“Going through all of that is like, man, I’ve got nothing to lose. I’ve persevered through the worst,” Jones told The Associated Press by phone this week from his hospital room at New York-Presbyterian/Columbia University Medical Center. “It’s really a blessing.”

The Bills and Jones never revealed what the illness was, but the player acknowledges now he was having difficulty dealing with the disease’s symptoms, which included swollen hands and feet and bloody urine.

After being cut by the Bills in February, Jones signed with New England. It was during a visit with kidney specialist Gerald Appel last summer when the severity of Jones’ condition was fully revealed. His kidney functions had deteriorated to a level where the only options were a transplant or dialysis.

“We tried a couple of things, but it was just irreversible damage at that point,” Appel said.

The next step was finding a match, which turned out to be Jones’ father, Donald Jones II.

Barring complications, Appel is confident Jones will live a long and normal life, including the prospect of playing baseball.
“He is certainly not a quitter by any means,” Appel said. “The first thing he talked to me about when he knew he needed a transplant was, ‘Well, I can’t play football, but could I play baseball?’”

Appel is not aware of anyone in baseball ever playing after a kidney transplant, but he’s familiar with one in basketball.

Among Appel’s patients is former NBA center Alonzo Mourning, who had the same disease. Mourning continued playing after kidney transplant surgery in 2003, and he won a championship with Miami in 2006.

If Mourning can do it, why not Jones?

“You always want to make sure you can maximally protect the transplant, but I think we’ll be able to figure out a way,” Appel said. “If he puts his mind to it, he’ll be able to do it. Determination is the big thing.”

Bills receiver Stevie Johnson saw that determination firsthand in his former teammate.
“He’s been taking it like a champ,” Johnson said. “There’s people who have no complications and are still sitting and sulking. He’s not. He’s still trying to get it. My hat’s off to him. Respect.”

“I don’t put anything past this guy,” Donald Jones II said. “He has definitely made me a believer.”

That faith is why Jones was elated upon first learning his kidney was a match and, at 48, he was healthy enough to be a donor.

“I feel pretty much like Santa Claus,” Jones said. “I just gave a gift and can’t wait for him to open it up, you know?”
His son knows.

“He and my mom gave me life, and then for him to give me a second chance at life, it’s like the most amazing feeling in the world,” Donald Jones III said. “For him to have to go through all of this stuff, it’s like, ‘Man, you know I love you.’”

Web articles – via partners/network co-ordinators. This website and its contents are the exclusive property of ANGA Media Corporation . We appreciate your feedback and respond to every request. Please fill in the form or send us email to: [email protected]
Previous: Scientists have revealed the supervolcano lurking beneath Yellowstone National : new study
Next: New Champ at the Movie Box Office : Hobbit Takes $73.7-M In North American Debut