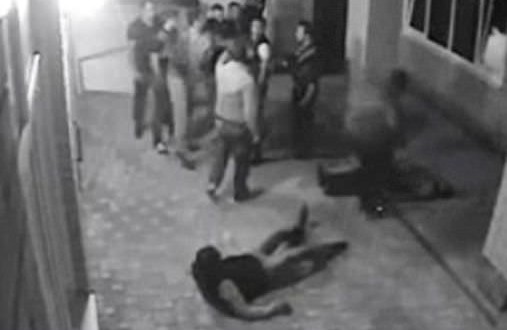 Nicolai Vlasenko : Russian boxer knocks out gang of thugs after they harassed his wife (Video)

Nicolai Vlasenko : Russian boxer knocks out gang of thugs after they harassed his wife (Video)

The dramatic video shows Nicolai Vlasenko, who is also a martial arts expert, teaching the would-be hardman a lesson outside a nightclub in Russia

According to DailyMailOnline, 29-year-old Nicolai Vlasenko was out with his wife when a group of men began to harass her.

The situation escalated and the men took the fight outside.

Closed-circuit television cameras show Vlasenko take on a group of about ten – landing two quick punches and putting two men on the ground.

A third man was also quickly dispatched by Vlasenko before the fight broke up.

According to DailyMailOnline, police saw the video and decided not to take action against the boxer .

Web articles – via partners/network co-ordinators. This website and its contents are the exclusive property of ANGA Media Corporation . We appreciate your feedback and respond to every request. Please fill in the form or send us email to: [email protected]
Previous: Rinelle Harper : Beaten teen meets men who rescued her along river
Next: Court failed to protect sick child, Report