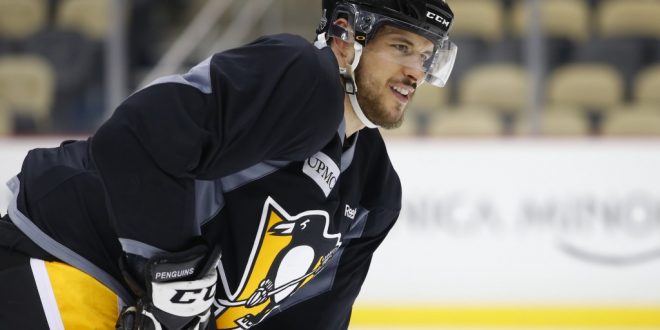 The Pittsburgh Penguins advanced to the Stanley Cup Final with a 2-1 win against the Tampa Bay Lightning at Consol Energy Center on Thursday. They will face the San Jose Sharks in Game 1 in Pittsburgh on Monday (8 p.m. ET; NBC, CBC, TVA Sports).

After the victory the Penguins were presented the Prince of Wales Trophy for winning the Eastern Conference title. In hockey lore it is bad luck to touch the trophy. But for Crosby it’s the opposite.

In 2009 Crosby decided to tempt fate by touching the trophy, and the Penguins went on to defeat the Detroit Red Wings in the Cup Final. He picked it up because the previous season, when Pittsburgh lost to Detroit in the Final, Crosby chose the safe route and kept his hands off the trophy.

“Everyone’s different; you see teams that don’t touch it, but it’s gone well when we’ve touched it here. So we went with that.”

The Sharks chose to not touch the Clarence S. Campbell Bowl after defeating the St. Louis Blues 5-2 in Game 6 of the Western Conference Final on Wednesday.

So for now, Crosby is 1-0 when carrying the trophy off the ice after clinching a trip to the Cup. We’ll see where he’s at in a few weeks.

Web articles – via partners/network co-ordinators. This website and its contents are the exclusive property of ANGA Media Corporation . We appreciate your feedback and respond to every request. Please fill in the form or send us email to: [email protected]
Previous: Robert Bates: Oklahoma ‘Taser error’ ex-officer jailed for four years
Next: Tom Lysiak: 3-time NHL All-Star passes away