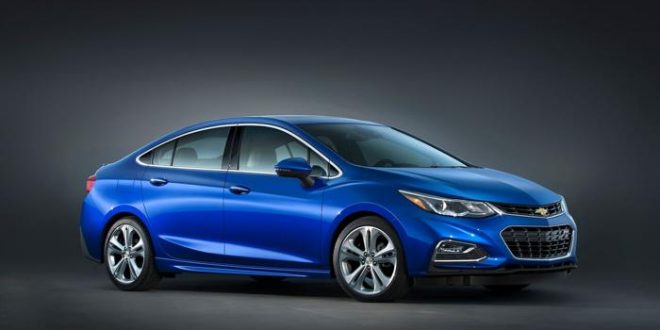 Chevrolet’s second-generation 2016 Cruze compact sedan builds upon the qualities we liked in the original, such as a quiet ride, while adding a refined turbocharged four-cylinder engine for every trim level and greater in-car connectivity.

The original Cruze was a sharp-looking compact, and the same can be said for Chevy’s newest small sedan. Taking design cues from both the Volt plug-in and Malibu mid-size, the 2016 Cruze arrives with sleek front-end styling that includes Chevy’s double grille treatment and swept-back headlights with LED accents. And those lines aren’t just for good looks — the 2016 Cruze checks in with a 0.28 coefficient of drag, putting it on par with the Chevy Volt and Corvette.

Following the industry trend, the 2016 Cruze adopts a faster-sloping roofline that gives the compact the look of a four-door coupe. A rising belt line and lower character line give the Cruze a sense of perpetual motion. The rear of the Cruze isn’t as exciting as the rest of it, but there are enough angles, shapes and lines to keep things relatively interesting. The upcoming Cruze Hatchback has a much better looking posterior, but we’ll have to wait until next year to see that version in Chevrolet showrooms.

The new Cruze can be further spruced with an RS package that adds a unique front fascia with a more sporting demeanor, larger wheels and a subtle deckled spoiler. Sadly, the RS package doesn’t add much in the way of performance upgrades, save for a slightly faster steering ratio on some models.

The interior design of the new Cruze isn’t a radical departure from the previous model, but it does usher in a number of welcomed upgrades. Chief among them is a more modern looking center stack that includes a standard 7-inch and optional 8-inch touchscreen display. Those screens run Chevy’s MyLink infotainment system, but the Cruze is also Apple CarPlay and Android Auto compatible. For those that really want to stay connected on the go, the Cruze offers 4GLTE WiFi via AT&T’s wireless network.

Although technology was a major point of emphasis during the Cruze development process, designers didn’t go overboard with the tech theme. For example, the Cruze retains a volume knob and HVAC controls are physical buttons rather than some virtual points on the car’s touchscreen. So while the Cruze offers plenty of whiz-bang electronics, it’s still easy to use.

Likewise, Cruze uses a straightforward gauge cluster with two main dials for speed and engine speed, with two, smaller gauges for fuel and engine temperature corralled in their own separate area. A center LCD screen is available for a number of different readouts. A multi-function steering wheel makes it easy to control Cruze’s various functions, but a generic rubber covering on the buttons comes across as a little low rent.

Materials in the Cruze are generally good across the board, particularly in the top-spec Premier models we tested. However, some touch places — such as the top of the doors — use hard plastics that ding an otherwise up-scale feeling interior.

For 2016 the Cruze moves to an new front-wheel drive platform that is up to 250 pounds lighter than the model it replaces. A good chunk of that savings — about 68 pounds — came from the use of a new 1.4L turbocharged engine and a more compact six-speed automatic transmission. For those wanting a more engaging drive, Cruze can also be had with a six-speed manual transmission.

That 1.4L is good for 153 horsepower and 177 lb-ft of torque. Chevy says those figures are good enough to scoot the Cruze from 0-60 in a respectable 7.7 seconds. But, perhaps more importantly, Cruze is highly efficient, delivering up to 42mpg on the highway. That figure falls to 40mpg highway in the Cruze Premier due to a different aero package and stickier tires.

Our drive time in the Cruze was limited to the top spec Premier and Premier RS models. That means we were coddled with niceties like leather seats, an eight-inch touchscreen and a suite of safety features like lane keep assist, blind spot warning and smart cruise control.

Our drive started in the center of Nashville where the Cruze proved nimble amongst the Music City’s bustling traffic. Steering in the Cruze Premier was a little light for our tastes, but it made for easy maneuvering. The Cruze Premier RS had a little better feel thanks to its beefier 18-inch wheels and tires. Although the Cruze uses an electronic power steering system, there is no option to adjust steering weight.

The Cruze’s suspension straddles the line between comfort and sport, providing a compliant ride over ruts and pot holes while still being stiff enough to have some fun in the twisties. The 2016 Cruze is easily near the top of the class in terms of ride and handling, but top honors remain with the Honda Civic.

Cruze feels peppy off the line, with max torque coming on at just 2,000rpm. Acceleration is strong throughout the range, with the 1.4L providing a little more kick than its 153 horsepower rating would indicate. Cruze isn’t an alternative to the Volkswagen GTI, but it doesn’t have any problem keeping up with modern traffic.

The six-speed automatic in the Cruze is well suited for the 1.4L turbo, but it’s clear the unit was designed more for efficiency than sportiness. Shifts are a bit lethargic, particularly when using the manual shift mode. We didn’t get a chance to sample the six-speed manual.

Brakes proved strong in the 2016 Cruze. We had to apply full emergency pressure when a woodland creature wandered onto the road ahead of us; thanks to the Cruze’s four-wheel anti-lock disc brakes, that animal is still alive.

Once we settled in behind the wheel, we started to soak up the Cruze’s new interior. The redesign center stack was easy to use thanks to its straightforward knobs and buttons. The eight-inch touchscreen in our Premier tester was responsive and offered good resolution. Pairing with Android Auto was as easy as plugging in our phone. However, we wish there was better integration between Android Auto and the factory head unit. For example, if you want to change the SiriusXM station while using Android Auto, it requires three different steps, which doesn’t exact reduce distracted driving. It should be noted that this is an issue for Android Auto on the whole and is not limited to the Chevy Cruze. We do give Chevy bonus points for lowering the ventilation system’s fan speed whenever a voice command feature is being used within Android Auto, making it easier to be heard.

One odd quirk we noticed while driving was a pronounced ridge on the face of the Cruze’s steering wheel. It’s not overly noticeable if you’ve got the wheel with a full grip, but it was somewhat annoying at anything less.

Cruze’s front seats proved comfortable with ample support. There’s even a decent amount of side bolstering you keep you in place during more spirited driving stints. Head and legroom is plentiful for those six-feet and even a little above.

The Cruze’s rear bench, however, isn’t quite as accommodating. The sedan’s low-slung roofline can make it difficult to get into the back seat without bonking your head. Once in that roofline blocks your line of sight and eats up some headroom. The Cruze at least offers adequate legroom in the back.

Our Cruze tester was packed with safety tech like adaptive cruise control and lane keep assist, which were the kind of features that were typically reserved for high-end luxury cars just a few years ago. Most systems worked as advertised, although the lane keep assist system was a little hit or miss; sometimes it nudges us back in our lane while other times it would let us drift outside of the lane markings.

Web articles – via partners/network co-ordinators. This website and its contents are the exclusive property of ANGA Media Corporation . We appreciate your feedback and respond to every request. Please fill in the form or send us email to: [email protected]
Previous: Chauncy Black: Teen asks for doughnuts, gets over $200K in online donations
Next: Shark Bites Boy Surfing at Atlantic Beach: Officials