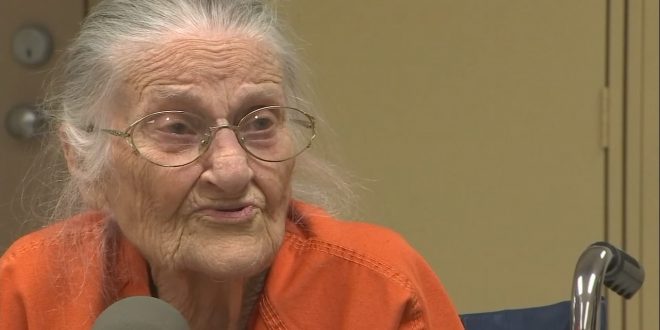 Eustis police arrested a 93-year-old woman accused of trespassing after the independent living facility in which she lived reported that she has refused to pay rent for the past three months.

Juanita Fitzgerald had never been arrested before, but it took at least two Eustis, Florida police officers to drag her to jail for trespassing when she refused to respect an eviction by her independent living facility.

Fitzgerald spent two nights in Lake County Jail before being released on Thursday, WKMG reported. She was not forced to pay the $500 bond, but is ordered to appear in court on December 27. Her 94th birthday is Friday.

The Franklin House, the retirement community where Fitzgerald lived since April 2011, claimed that she hadn’t paid rent for three months. Karen Twinem, of National Church Residences, which owns the facility, told WKMG that Fitzgerald refused to pay, because she thought would die soon. Twinem also mentioned that Fitzgerald complained of mold in her residence but that no mold was found by the facility.

Just snapped this picture of 93-year-old Juanita Fitzgerald as she left jail with a caregiver. She spent 2 nights in jail on trespassing charges when she refused to leave her apartment after being evicted. pic.twitter.com/HWy1bkysMF

Court papers say that Fitzgerald was warned Monday that the eviction would occur Tuesday and was repeatedly asked to leave, according to WKMG.

“Unless you carry me out of here, I’m not going anywhere,” Fitzgerald said, the documents purport. She also allegedly slipped out of her wheelchair while being escorted off the premises by Eustis police.

Body camera footage shows Eustis officers and Lake County sheriff’s deputies attempting to get Eustis into a police car. With their hands around her arms, the officers assure her they are applying no pressure, as she is heard screaming that she is in pain. She was then transported without handcuffs, police told WKMG.

However, in an interview with WKMG’s Adrianna Iwasinski, Fitzgerald is seen in handcuffs and wearing an orange jumpsuit. The nonagenarian claimed that she paid her September rent, but that the facility and its owner “wouldn’t take” her payments anymore, once “she decided that she’s gonna put me out.” It’s unclear if the woman Fitzgerald refers to is Twinem.

93 year old Juanita Fitzgerald says she tried to pay her rent but was refused. Says she did not tell them she was dying to get out of paying rent. She says that's a lie! Also says she's never been arrested before but has faith God will get her through! News 6 WKMG / ClickOrlando pic.twitter.com/JjE4wifKlx

Twinem told the local news outlet that Fitzgerald’s family had been contacted and so had the Homeless Coalition, LiveStream Behavior Center, the United Way of Lake County, Family and Children’s Services of Lake County, the Area Agency on Aging and several other apartments and transitional housing programs. Fitzgerald refused help every step of the way.

“I don’t want them to help me. I don’t need no help. I’ve got all the help I need,” Fitzgerald said, reportedly pointing to the sky.

“I don’t have anybody. My family is in Tennessee and I told them not to tell my son anything that’s going on,” Fitzgerald said.

In another interview, upon her release, Fitzgerald showed bruises on her arms and said to WFTV, “Now, can you imagine anybody doing that to an old woman?”

“They wouldn’t treat a murderer like they treated me,” she added.

Fitzgerald is staying with a friend in the meantime.

Web articles – via partners/network co-ordinators. This website and its contents are the exclusive property of ANGA Media Corporation . We appreciate your feedback and respond to every request. Please fill in the form or send us email to: [email protected]
Previous: Ashlee Hattermann: 13-year-old Katy runaway found safe in Mexico
Next: Wrong San Jose plane: Woman thought she was booked on a flight to California