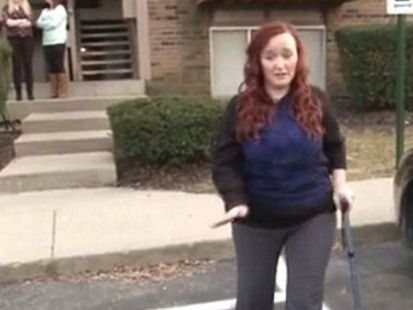 Ashley Brady, Woman With Prosthetic Leg Finds ‘Really Rude’ Letter on Windshield After Making Simple Request, Ashley, 26, in Ohio, was forced to learn how to walk again after she lost her right leg in an accident last year.

Speaking to Fox 2 News, she said she requested a disabled parking space at her apartment complex after struggling to get to her car when there was snow and ice on the ground, causing her to fall many times.

After waiting nearly the whole winter to be allocated the space, Brady arrived home just two days later to discover her space had been taken.

“I left her a note saying why I needed that spot, that I found it disrespectful, and if she did it again she would be towed,” Brady told the Amputee Coalition of America.

“I was stern and confident in what I was saying,” she told Fox 2 News. When she received the reply from her neighbour in the form of a piece of paper tucked under her windscreen wiper, Brady “read it probably like five times over and over” out of shock. 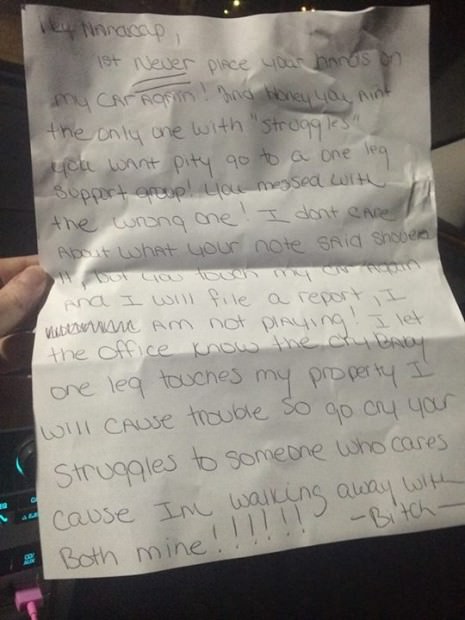 “1st never place your hands on my car again! And honey you aint the only one with ‘struggles’ you want pity go to a one leg support group! You messed with the wrong one! I don’t care about what your note said, but you touch my car again and I will file a report, I am not playing! I let the office know the cry baby one leg touches my property I will cause trouble so go cry your struggles to someone who cares cause I’m walking away with both mine!!!!!! – B****” [sic].”

The management of Brady’s apartment complex reportedly have yet to decide on an appropriate course of action.

Brady has filed a grievance with Ohio police and her struggle has not gone unnoticed. She sent a picture of the note into the Amputee Coalition of America and received hundreds of messages support from the group’s Facebook community.

Web articles – via partners/network co-ordinators. This website and its contents are the exclusive property of ANGA Media Corporation . We appreciate your feedback and respond to every request. Please fill in the form or send us email to: [email protected]
Previous: Voltage Pictures ordered to pay $22K to TekSavvy in illegal downloads case, Report
Next: Eglinton West to be partly closed through weekend (Video)