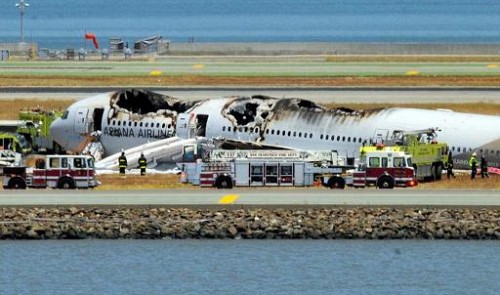 The pilot of the jet that crash-landed at San Francisco’s airport last summer worried privately before takeoff about handling the Boeing 777, especially because runway construction meant he would have to land without any help from a common type of guidance system.

And neither the trainee nor an instructor pilot in the cockpit said anything when the first officer raised concerns four times about the plane’s rapid descent.

Asiana announced last week that it had hired Akiyoshi Yamamura, a former safety specialist at Japan’s All Nippon Airways, to head the company’s safety program. Yamanura has said that he will take a more proactive approach to training in safety procedures.

Several lawsuits against Asiana and Boeing have been filed in the past five months.
Brian Alexander, a partner at Kreindler & Kreindler, told China Daily that he expects the NTSB to cover a number of important safety issues concerning pilot conduct on the flight and training, as well as the autopilot and auto-throttle.

“We also expect them to address the rescue effort and aircraft evacuation. As always we are hopeful the NTSB will ultimately make safety recommendations that will prevent tragedies like this crash from happening again,” said Alexander, who has handled many flight accident cases and had come to Washington DC for the hearing.

Floyd Wisner, the principal of Chicago-based Wisner Law Firm, said he believes the NTSB will conduct a comprehensive investigation.

“It is important to the victims of this flight that all causes of this crash be identified and remedied so that such an event does not occur again,” said Wisner, an aviation crash attorney.

He said new information surrounding the crash highlights the danger of jumping to premature conclusions about the causes of air disasters. Wisner warned in July that it was too early to claim pilot error alone caused the accident, adding that air crashes are usually the result of a series of events.

“Crashes of this nature often include both an operational error and a mechanical failure,” he said.

He said that while passengers on the flight may have an action against the air carrier Asiana, limitations under the international “Montreal Convention” treaty mean this compensation will be limited.

“We believe passengers may also have an action against the aircraft manufacturer, Boeing,” he said. “A viable action against Boeing may be their only reasonable hope of obtaining fair recompense for their physical and psychological injuries.”

The Boeing 777 that crash landed had 307 people on board, including 16 crew members and 141 Chinese citizens. More than 90 of them took Asiana Airlines Flight 362 from Shanghai Pudong International Airport and connected to Flight 214 at Incheon, South Korea.

The Chinese passengers included 70 students and teachers from schools in Zhejiang and Shanxi provinces who were travelling to the US for summer camps.

Web articles – via partners/network co-ordinators. This website and its contents are the exclusive property of ANGA Media Corporation . We appreciate your feedback and respond to every request. Please fill in the form or send us email to: [email protected]
Previous: Snowden documents: NSA Uses Google Cookies to Track Targets
Next: 71st annual golden globe awards : The list of nominees