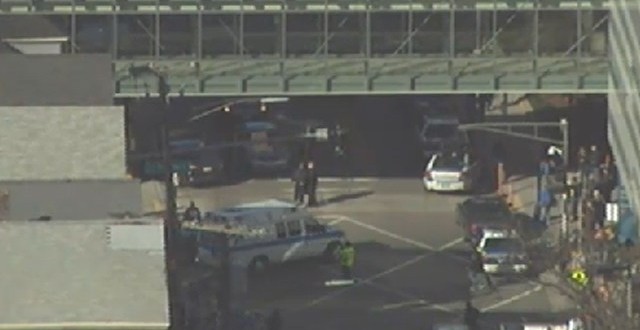 Boston Police confirmed a shot inside Brigham and Women’s Hospital had life-threatening injuries Tuesday and the suspected gunman had killed himself.

Boston Police said the victim was shot twice and has life-threatening injuries. A source said the victim is a male surgeon, but at this time, the hospital said it will not be releasing any information about him.

The shooting occurred around 11 a.m. in the Shapiro Cardiovascular Center at 75 Francis St., which was temporarily placed in lockdown. The rest of the hospital was not in lockdown and the hospital and police now say the situation is under control.

“At this time, there’s no threat out there. The area’s secure,” Boston Police Commissioner William Evans said at a press conference with hospital officials Tuesday afternoon.

He said the first calls were received at 11:04 a.m. reporting a shooting at the hospital. Minutes later another caller reported that a doctor had been shot. He said the shooter came into the hospital and asked for the doctor by name.

“He was targeted, and the reason right now is not clear,” Evans said. “There’s something in the past that upset this guy to come in looking for this particular doctor … Our prayers go out to his wife, and we all pull for his speedy recovery.”

When police arrived at the hospital, they made their way to the second floor and found a man they believe to be the suspect inside an examining room, dead of a self-inflicted gunshot wound. The gun believed to have been used in the shootings was found beside him.

Evans said the shooter was not a doctor, and police don’t believe he was a patient at the hospital. Before he was found dead, the shooter was described to police as a 6 foot tall male with glasses, wearing beige khakis and a blue sweater.

The hospital said there are no metal detectors at the facility, but that could be something that will be considered in the future.

“We’ve had a very tragic situation here this morning,” hospital President Betsy Nabel said. “I want to thank the Boston Police Department for doing an extraordinary job of responding rapidly. I want everyone to know that all of us here at Brigham and Women’s Hospital are alert, have responded, we are available now for all who have been affected by this situation, and we will continue to make all the resources of the hospital avilable to those who have been affected in any way.”

“It was a great response by not only my officers but the hospital,” added Evans. “I’ve got to commend their response. We had a dangerous situation here, but they did everything they could to neutralize it.”

Web articles – via partners/network co-ordinators. This website and its contents are the exclusive property of ANGA Media Corporation . We appreciate your feedback and respond to every request. Please fill in the form or send us email to: [email protected]
Previous: Sitting too long increases risk of dying early, New Study
Next: China denies suggestions it stole designs for new U.S. Jet Fighter