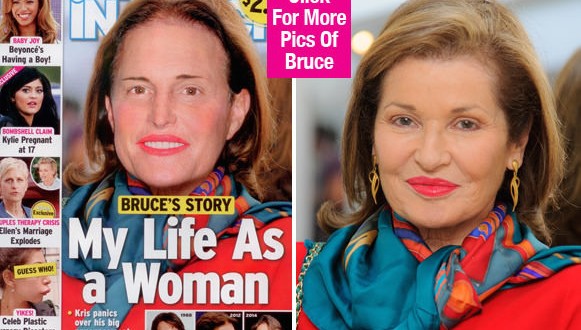 Bruce Jenner Transforms Into a Woman in Magazine Cover (Photo)

Bruce Jenner Transforms Into a Woman in Magazine Cover (Photo)

Bruce Jenner, 65, should be fuming! The reality star was on the cover of InTouch Weekly, Jan. 14, with bright red lipstick and he almost looked unrecognizable. Kris Jenner was reportedly furious when she saw the cover and we can understand why but now Page Six claims that not only is this photoshopped, but it was actually his face pasted onto 67-year-old actress, Stephanie Beacham!

“[Bruce] will come clean in 2015 about transitioning. This will be the year of his coming out. He knows that people have recognized his changes, and he’s finally becoming more comfortable with himself and his choice to be a woman,” a source reportedly told the publication. “When Bruce goes public, he wants to go big and come out as a transwoman on the cover of ‘The Advocate,’ the ultimate LGBT magazine.”

“He wants to look as glamorous as possible — full makeup with a bold wardrobe. He won’t live his new life in designer clothes like the Kardashian women. He just wants his first official portrait as a woman to be classic and memorable,” the source reportedly added.

Sources told the magazine that Bruce “wants to live his truth: He’s a great father who’s had an amazing life who just so happens to be trapped in the wrong body.

“Bruce hopes that in a few years, once he’s living full-time as a woman, he’ll be wondering why he waited so long to do this.”

Bruce’s former wife Kris Jenner is reportedly “outraged” over the doctored photo and slammed the magazine.

“It’s just mean to do whether or not it’s true,” Kris told her friends, TMZ reported, adding that the reality TV star has “contempt for the mag jumping to conclusions and then altering the image to fit its story.”

Web articles – via partners/network co-ordinators. This website and its contents are the exclusive property of ANGA Media Corporation . We appreciate your feedback and respond to every request. Please fill in the form or send us email to: [email protected]
Previous: Two face murder charges in Chinatown restaurant killing
Next: Don Harron : Actor, Anne of Green Gables adapter dies at 90