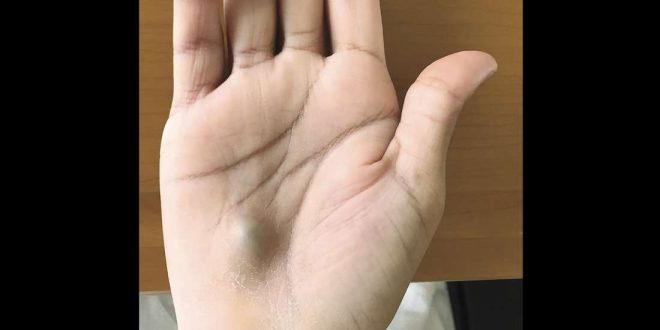 A man was left with a bulging lump on his hand and a deadly heart infection after a simple trip to the dentist, doctors claim.

The 27-year-old, from Canada, was diagnosed with endocarditis – which can trigger heart failure and is caused when bacteria reaches the heart.

The lump was actually an aneurysm – an enlarged blood vessel – caused by an infection of the heart, according to the report published in the New England Journal of Medicine.

When the 27-year-old went to A&E he had pain in his upper-left abdomen and had also been suffering fevers.

He had also lost 26lbs in six weeks.

An ultrasound of his heart revealed a mass on his aortic valve – the valve that regulates blood flow to the body’s main artery.

He was diagnosed with bacterial endocarditis and tests revealed the infection was caused by streptococcus bacteria.

The condition occurs when bacteria enters the bloodstream and attaches to the heart.

If left untreated it can be deadly.

Doctors believe the man picked up the infection at a routine trip to the dentist in the weeks prior.

Strep infections can enter the blood stream through the gums, especially if a person has poor oral hygiene.

He was treated with antibiotics and needed surgery to replace his aortic valve, which had suffered too much damage from the infection.

People with heart conditions are more likely to develop bacterial endocarditis, according to the American Heart Association.

The infection can be caused by bacteria introduced into the blood stream, usually through normal activity such as tooth brushing which causes minor injury to the lining of the mouth or gums, the association said.

Symptoms of the condition usually include a fever, chills, fast heart rate, fatigue, night sweats, aching joints and muscles, persistent cough, or swelling in the feet, legs or abdomen.

If you notice these symptoms you should speak to a doctor as soon as you can.

Web articles – via partners/network co-ordinators. This website and its contents are the exclusive property of ANGA Media Corporation . We appreciate your feedback and respond to every request. Please fill in the form or send us email to: [email protected]
Previous: Python devours deer at Collier Seminole State Park (Photo)
Next: Israeli Woman Falls From Plane’s Door