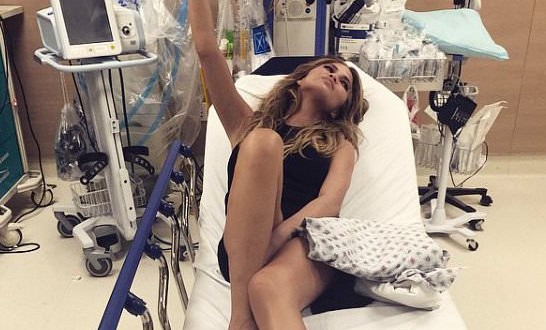 Chrissy Teigen was hospitalized Thursday, the model wound up needing medical attention after fracturing her foot in New York…and she was still wearing her glamorous black gown while lying on a hospital gurney.

Chrissy Teigen had joined husband John Legend while he taped The Tonight Show. The crooner had been paired up with hip hop star Common – his co-collaborator for the Oscar nominated song “Glory” – as they did the Jimmy Fallon Lip Sync Battle. But afterwards something went wrong.

She noted on Twitter “Was just informed that my last words last night were “world starrrr.”

Web articles – via partners/network co-ordinators. This website and its contents are the exclusive property of ANGA Media Corporation . We appreciate your feedback and respond to every request. Please fill in the form or send us email to: [email protected]
Previous: Oceans are warming so fast that readings are now off the chart, Report
Next: Fish found living beneath Antarctica : Whillans Ice Stream