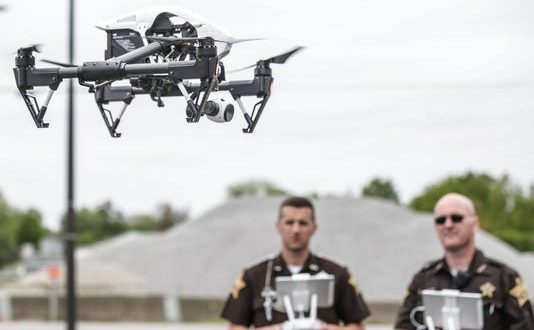 The Elizabeth Police Department will begin to use drones with a recorded message from the mayor telling residents to socially distance and go home amid the spread of the coronavirus.

It’s a tactic that was first used by China. Drones there were equipped with speakers to warn residents to wear masks, CNN reported in February. Spain and France have also used loudspeaker drones reminding residents about travel restrictions and other guidelines.

The drones will be used to remind residents to follow social distancing orders set by Gov. Phil Murphy, which ban social gatherings of any kind throughout the state and instruct residents to stay home unless for an essential purpose.

“These drones will be around the city with an automated message from the Mayor telling you to STOP gathering, disperse and go home,” the Elizabeth Police Department posted on Facebook. “Summonses HAVE AND WILL CONTINUE to be issued to those found in violation. Fines are up to $1000.”

There were at least 1,214 coronavirus cases in Elizabeth, making it the third-highest reported rate of infection among municipalities in New Jersey. Only Newark and Jersey City have more cases.

DJI Technology’s Public Safety Disaster Relief Program sent Elizabeth police five Mavic 2 Enterprise drones, which come with a speaker, a spotlight and a flashing beacon as interchangeable attachments. Two of the drones were donated and the other three are on loan for an initial 90 days, a DJI spokesman told NJ Advance Media.

“DJI’s Disaster Relief Program has provided 100 drones to 43 organizations in 22 states,” a DJI spokesman said. “We’re excited to see our technology used to protect the public as well as protect public safety workers, and we’re glad to see that police departments, fire departments and other public safety workers are putting them to use immediately.”

The company, headquartered in China, suggested on its website that its drones could be used to spray disinfectants or check temperatures using infrared cameras. A DJI drone with a thermal camera is being used at a temporary hospital at the Javits Center in New York, although it is sitting on a counter and the technology hasn’t been medically proven to work yet.

Elizabeth spokeswoman Kelly Martins said the drones the city received will only use the recorded message from Mayor J. Christian Bollwage reminding people to socially distance, or stay six feet apart. The technology will be used for people who gather in large groups or those who do not distance from each other.

“They will be used throughout the city, specifically in areas that may be difficult for a police car to access, to have people do social distance,” Martins told NJ Advance Media.

The Elizabeth Police Department has been using drones since 2018. In one instance, its drones equipped with thermal imaging and cameras helped firefighters locate hot spots while combating flames aided investigators to determine the origin of the blaze.

Web articles – via partners/network co-ordinators. This website and its contents are the exclusive property of ANGA Media Corporation . We appreciate your feedback and respond to every request. Please fill in the form or send us email to: [email protected]
Previous: Madiha Choksi using 3D print applied sciences to produce PPE
Next: Stroke brain rats study: Transplanted reprogrammed skin cells