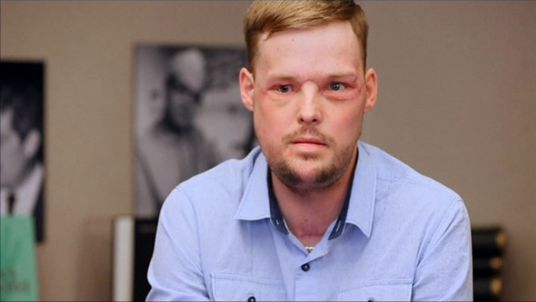 His doctor called it a ‘miracle,’ but for Andy Sandness, a face transplant gave him his life back, 10 years after he’d tried to end it all.

Andrew Sandness, 32, is from the small town of Newcastle. When he was 21-years old he was disfigured in a suicide attempt. After surviving a shot to the face, his recovery began with years of multiple reconstructive surgeries.

December 23rd, 2006 was a day that would change Andy Sandness’s life forever. At 21-years-old, Andy made a decision he said he instantly regretted and pulled the trigger.

He woke up in Rochester at Mayo Clinic with Dr. Mardini telling him he could help, but he couldn’t make any promises.

After eight surgeries, Andy was finally able to go home with a prosthetic nose that kept falling off and a mouth the size of a quarter.

“You avoid looking at little kids because you are afraid you are going to scare them. Stuff like that, it hurts,” said face transplant recipient Andy Sandness.

It wasn’t until last summer when Andy was told there was something more doctors could do for him.

“There’s a new procedure that’s out that we’re thinking about starting, and we’re thinking you might be a reasonable candidate for it,” said Mardini.

After practicing the operation 50 times over three years, a team of about 60 people, and more than 50 hours in surgery– Andy became Mayo Clinic’s first recipient of a face transplant.

According to the Associated Press, Calen Ross was a 21-year-old man from Minnesota who struggled just like Andy; he took his own life last June.

At first his wife was leery about donating her husband’s face.

“The reason I decided to go ahead and go through with it, was so that I can later down the road show Leonard what his dad had done to help somebody,” says Ross.

Three weeks after surgery, Andy looked into a mirror seeing his new face for the first time, and now Andy can’t look away.

“My mind and body have finally accepted my new changes,” says Sandness.

Andy recently received a letter from Ross’s family describing the man they loved and missed, and he wrote back.

“I said he’s still going to continue to love hunting, fishing and dogs, through me,” says Sandness.

While Andy’s life changed forever in 2006, he says the darkness that once filled his life is now replaced by hopes for a bright future.

Web articles – via partners/network co-ordinators. This website and its contents are the exclusive property of ANGA Media Corporation . We appreciate your feedback and respond to every request. Please fill in the form or send us email to: [email protected]
Previous: Bijou Phillips Reveals She Needs a Kidney Transplant, Report Says
Next: Winston Churchill’s essay on aliens discovered, Report