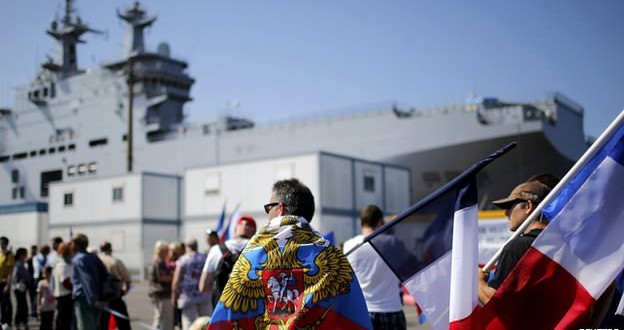 France holds up delivery of warships to Russia, Report

France holds up delivery of warships to Russia, Report

France said on Thursday that the conditions were not yet met to deliver the first of two controversial Mistral warships to Russia, contradicting reports that Russia had received an invitation to take delivery next month.

“The conditions today are not met to deliver the Mistral,” French Finance Minister Michel Sapin told RTL radio in an interview.

“What are these conditions? It is that in Ukraine we are in a situation that is becoming more normal, that allows for things to cool down.”

RIA news agency on Wednesday quoted Russian Deputy Prime Minister Dmitry Rogozin as saying that the invitation was sent for Russia to take delivery of the first of two Mistral helicopter carriers from France on Nov. 14.

RIA also quoted Rogozin as saying the second vessel would be put afloat the same day.

Web articles – via partners/network co-ordinators. This website and its contents are the exclusive property of ANGA Media Corporation . We appreciate your feedback and respond to every request. Please fill in the form or send us email to: [email protected]
Previous: Brittany Maynard : Terminally ill woman fulfills wish on bucket list
Next: Justin Bourque Mountie killer gets 75 years without parole