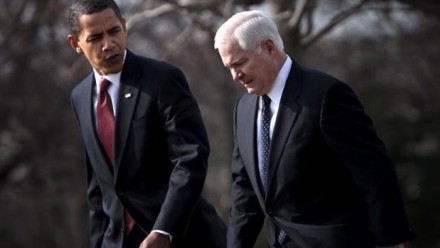 Despite an admirable intellect and dedicated support for US military personnel at war, former Secretary of Defense Robert Gates says President Barack Obama didn’t have sufficient faith in the troop-surge strategy he ordered in Afghanistan.

After months of debate with Gates and top advisers, Obama ordered a troop surge in Afghanistan in late 2009. Around 30,000 soldiers were to be the final push for stabilizing the war-torn country before a phased withdrawal starting in mid-2011.

Gates, however, gives credit to Obama for approving the 2011 raid on Osama bin Laden’s compound in Pakistan, describing it as “one of the most courageous decisions I had ever witnessed in the White House.”

Gates also writes that Vice President Joe Biden has been “wrong on nearly every major foreign-policy and national-security issue over the past four decades.”

Reacting to the comments reported in Gates’ book, the White House National Security Council said, “It is well known that the president has been committed to achieving the mission of disrupting, dismantling, and defeating Al-Qaeda.”

The statement added that Obama also ensured that “we have a clear plan for winding down the war, which will end this year” with the withdrawal of most international troops.

It also asserted that Obama relies on Biden’s “good counsel” every day and considers him “one of the leading statesmen of his time.”

Web articles – via partners/network co-ordinators. This website and its contents are the exclusive property of ANGA Media Corporation . We appreciate your feedback and respond to every request. Please fill in the form or send us email to: [email protected]
Previous: More than 100 arrested in Disability Scam in NYC : Report
Next: Thai woman found in suitcase at US border (PHOTO)