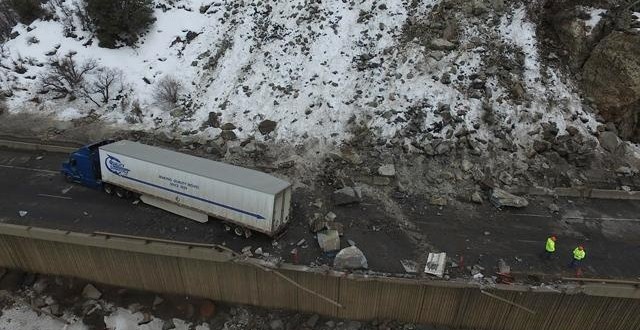 I-70 in Glenwood Canyon Closed After Rock Slide (Photo)

I-70 in Glenwood Canyon Closed After Rock Slide “Photo”

The Colorado Department of Transportation says it will take until at least Thursday to make rock slide damaged I-70 safe to drive on through Glenwood Canyon.

The rockslide occurred in Glenwood Canyon at mile marker 124.2, directly west of Hanging Lake Tunnel and eight miles east of Glenwood Springs. The Colorado Department of Transportation said it flagged traffic through the area throughout the day Monday as it worked to clear the boulders, but another rockslide Monday night around 9:03 p.m. caused the full closure of I-70 through the canyon.

CDOT said it’s unknown when the Interstate will reopen. The alternate route for westbound motorists is north on CO 131 at Wolcott to Steamboat Springs, west on U.S. 40 to Craig, then south on CO 13 to Rifle and back to I-70. This is a 203-mile alternate route that will take about three hours and 50 minutes to travel. This detour adds 146 miles and about three hours to a regular trip from Wolcott to Rifle on I-70, which is 67 miles or about 45 minutes.

A tractor-trailer got caught in the landslide Monday night and was disabled, CDOT said, but no injuries were reported. With the help of the Colorado State Patrol on Tuesday morning, crews were able to clear out any tractor-trailers that were stuck in the canyon. Passenger vehicles were cleared out overnight, CDOT said.

A geohazards team is on site and in a helicopter evaluating the damage and, according to the CDOT, there is roadway, retaining wall and bridge/guardrail damage.

Web articles – via partners/network co-ordinators. This website and its contents are the exclusive property of ANGA Media Corporation . We appreciate your feedback and respond to every request. Please fill in the form or send us email to: [email protected]
Previous: Isle of Wight: Triceratops obstructs traffic on United Kingdom street “Photo”
Next: Oculus Rift Ready PC Bundles Available for Pre-order, shipping April 23