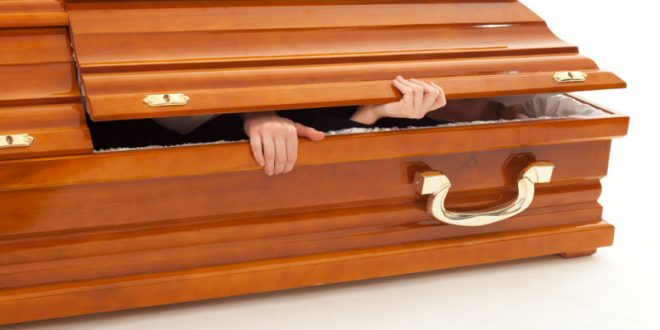 Indian teenager wakes up during his funeral after being presumed dead

Indian teenager wakes up during his funeral after being presumed dead

Indian teen wakes up at own funeral? A 17-year-old boy who was pronounced dead after developing a fever woke up a day later — in a coffin … on the way to his funeral.

Police confirmed the incident to the Times of India on Monday. Relatives were startled as the teen’s eyes suddenly opened and he began breathing hard in route to his cremation ceremony.

Last month, Kumar Marewad developed a high fever after being bitten by a stray dog, reports say. Physicians placed him on a ventilator after his condition began to worsen.

Marewad’s family was told by medical staff that his infection had begun to spread throughout his body, leaving him in critical condition. Doctors said that he would not be survive unless attached to a respirator. They opted to take the boy home when asked if they wanted to keep Marewad on life support.

Once removed from the ventilator, family said the teen became motionless and they believed he had stopped breathing.

Under the impression that Marewad had passed, the family went forward with ceremonial preparations for his death.

Marewad woke up on the way to the cremation ceremony and was immediately rushed back to the hospital, where doctors were reported to have said he is suffering a viral infection called meningoencephalitis, caused by the dog bite.

A doctor told the news outlet the teen had likely developed meningoencephalitis, a condition which occurs when the brain and surrounding tissues have become inflamed, usually because of an infection.

Web articles – via partners/network co-ordinators. This website and its contents are the exclusive property of ANGA Media Corporation . We appreciate your feedback and respond to every request. Please fill in the form or send us email to: [email protected]
Previous: McLaren 650S replacement teased again (Watch)
Next: Japanese zoo culls 57 macaques carrying ‘invasive’ genes