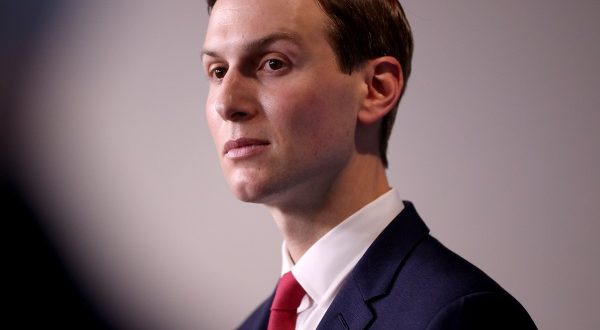 White House senior adviser Jared Kushner was forced to clarify he is not trying to change the date of the November election after coming under fire for suggesting it was a possibility.

Election officials have raised concerns about how to conduct the general election on November 3rd if the coronavirus is still a threat.

‘It’s not my decision. I’m not sure I can commit one way or the other, but right now that’s the plan,’ Kushner told Time magazine in an interview on Tuesday afternoon when asked about postponing it.

‘Hopefully by the time we get to September, October, November, we’ve done enough work with testing and with all the different things we’re trying to do to prevent a future outbreak of the magnitude that would make us shut down again,’ he said.

His comment sparked outrage and ramped up speculation that the White House was trying to change the date, which it cannot do. It would take an act of Congress to move the election.

Kushner later released a statement to clarify there were no such conversations.

‘I have not been involved in, nor am I aware of any discussions about trying to change the date of the Presidential election,’ he said.

But Kushner’s comments revived fears, particularly among Democrats, that President Donald Trump could use the coronavirus to delay or delegitimize November’s contest.

Hillary Clinton criticized Kushner for his comments, writing on Twitter: ‘I can’t believe I have to write this sentence, but the president’s son-in-law doesn’t get to decide when the election is.’

Former Vice President Joe Biden, the Democrats’ presumptive 2020 nominee, warned about the threat of a delayed election at a fundraiser last month.

‘Mark my words, I think he is going to try to kick back the election somehow — come up with some rationale why it can’t be held,’ he said of Trump.

The date of general election is statutorily set as ‘the Tuesday next after the first Monday in the month of November’ or ‘the first Tuesday after November 1,’ according to the 1845 law passed by Congress. Only new legislation could change that date.

Additionally, Article II of the Constitution declares Congress – in effect – sets the election date: ‘The Congress may determine the time of choosing the electors, and the day on which they shall give their votes; which day shall be the same throughout the United States.’

The coronavirus pandemic – which led to the cancellation of schools, delayed sporting events, closed churches and put an end to any large scale gatherings like the annual SXSW conference – has already affected the Democratic primary process.

New York canceled its June primary because of the disease and 15 other states moved back or extended mail-in voting for their primaries.

Such moves have been controversial and lawsuits have been filed with the argument people have the right to vote.

New York’s case illustrates that. Former Democratic presidential candidate Andrew Yang sued the state over the move. And the judicial branch showed its strong commitment to protecting the right to vote, ordering the election to go forward. State officials have appealed.

Additionally, Wisconsin Gov. Tony Evers lost his bid last month to delay his state’s primary until June. The court ordered it to go forward amid criticism that in-person voting could contribute to the spread of the coronavirus. Voters queued to vote on April 7 in long lines – many of them wearing face masks and practicing social distancing – due to the limited number of polling places open because of a shortage of workers to staff them.

The Wisconsin Department of Health traced 19 cases of the coronavirus to that election.

Web articles – via partners/network co-ordinators. This website and its contents are the exclusive property of ANGA Media Corporation . We appreciate your feedback and respond to every request. Please fill in the form or send us email to: [email protected]
Previous: New Mexico woman who beat 1918 flu, has coronavirus (Video)
Next: Yellowstone to half reopen, amid COVID-19 self-quarantine differences between states