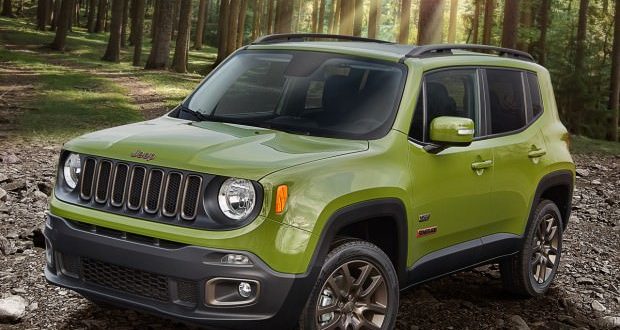 The first subcompact SUV from Jeep was designed in America but suited to meet customer needs in more than 100 countries. Built in Italy and based on the Fiat 500L, the 2016 Jeep Renegade won’t disappoint Jeep fans.

In what is absolutely not a coincidence, the Renegade immediately conjures up the Wrangler. Upright grille from the Willys Jeep (references abound here), round headlights, squared off wheel arches to mimic the Wrangler’s guards, short overhangs and big rear view mirrors.

The 17-inch wheels look completely lost in the wheelarches which are even more cavernous owing to the Trailhawk’s 50mm of extra ride height. The wheels are also a bit cheap looking but will probably survive the belting the car is intended to take.

Less rugged is the interior, despite a fairly self-conscious effort to make it look and feel chunky. The front seats are flat and unsupportive with the rears just as lacklustre making sure everyone is sliding around together. Luckily, front passengers get a dash-mounted grab handle.

It seems quite well put together, however, but with carpets and easily-marked plastics, you’ll hope your passengers don’t bring the mud in with them too often. And the “Since 1941” stamped into the steering wheel can go.

The dashboard is reasonably clear and has plenty of information to share via the screen between the dials but whoever thought marking the redline with a water splash graphic in bright orange should probably rethink their design decisions.

Storage is limited to two cupholders up front, door pockets in each door and nets on the front seat backs.

The Renegade does not yet have an ANCAP star rating although it scored five EuroNCAP stars in 2014.

The Beats-branded nine-speaker stereo is run via Fiat-Chryser’s UConnect system, accessible through the 6.5-inch touchscreen. While it improves with every attempt, it’s still quite clunky and when the sat-nav is added, becomes a bit of a mess.

It’s a genuine mud-plugging proposition and will take on some much bigger machinery.

Thankfully, not every function has been crammed into the touchscreen interface, so you’ll spend more time with your hands on the wheel rather than working out which bit of the screen has the climate control.

The Trailhawk is powered by Fiat’s 2.4-litre four naturally-aspirated four-cylinder producing 129 kW and 230 Nm. Jeep reckons you’ll get 7.5L/100km on the combined cycle. Our mostly city driving with a longish motorway run produced an 11.0L/100km average over a week.

The transmission is a nine-speed ZF automatic driving all four wheels.

The Trailhawk also has Jeep’s five mode Selec-Terrain system which should cover pretty much every eventuality – Auto, Sport, Mud, Sand and, just for the Trailhawk, Rock. The Trailhawk is rated to tow 400kg unbraked and 907kg braked.

The Trailhawk name suggest that things are going to get muddy – compared to the rest of the range, the range-topper rides 50mm higher and has exposed, easy-to-reach tow hooks in the fairly unlikely event you get stuck. It also has a 20:1 low-range crawl ratio and Active Drive 4×4 which means it can switch between front and all-wheel drive. It’ll also wade through almost half a metre of water. It’s a genuine mud-plugging proposition and will take on some much bigger machinery out in the bush.

On the road, where we spent all our time in the Renegade, it’s not what you’d call particularly inspiring. There’s a number of sources of noise that contribute to a less than quiet cabin and having to constantly correct your course at freeway speeds adds to the tiring nature of the Renegade.

It’s much better at lower speeds, pottering around but then again, its nine-speed transmission needs a lot more work on the shift mapping because it seems to forget which gear it needs to be in when you sink the right foot. If you don’t need the Trailhawk’s extra off-road goodies, consider the 1.4 litre Limited or Longitude.

Rugged, dependable and good off-road are the most obvious qualities of the Trailhawk. It stands out from the rest of the mini-SUVs by being able to do the S and the U with plenty of vigour.

It’s just a shame that its on-road manners can’t match that of its big brother, the Cherokee. Unless you’re planning on proper off-roading, the Trailhawk might not be quite what you’re looking for.

Web articles – via partners/network co-ordinators. This website and its contents are the exclusive property of ANGA Media Corporation . We appreciate your feedback and respond to every request. Please fill in the form or send us email to: [email protected]
Previous: First observations of galactic center with GRAVITY (Video)
Next: Researchers model universe using Einstein’s full theory