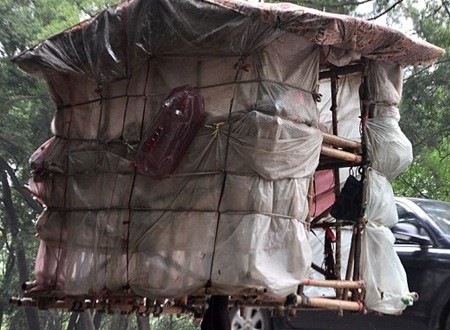 Looking like someone out of the Flintstones, 38-year-old Liu Lingchao is the human equivalent of a real-life human snail, carrying his 132 pound (60 kilogram) house, made of bamboo poles and plastic sheets, on his back as he travels throughout China. A veritable travelling salesmen, he earns money for food and supplies by collecting plastic bottles and metal cans along his route that he sells when he passes through a new Chinese city along his way.

Lingchao has thus far gone through three such portable shelters. The one he carries around now measures 5-feet wide (1.5 meters) and stands 7.2 feet (2.2 meters) high. Inside the shelter, he has a padded horizontal bar that rests upon his shoulders while carrying the home on his back. As far as the comforts of home, his waterproof “snail shell” includes portable bedding, shelves for storage, a portable stove for cooking and heat, and promises a wonderful view that he chooses each time he sets his shelter on the ground. So far he has traveled 250 miles with his mobile home on his back.

“I can move anywhere I want to go. It’s an easy decision. It saves me a lot of money on the journey. I feel free, I can go wherever I want to go, and I live on my own.”

Web articles – via partners/network co-ordinators. This website and its contents are the exclusive property of ANGA Media Corporation . We appreciate your feedback and respond to every request. Please fill in the form or send us email to: [email protected]
Previous: Mutant cockroaches evolved to find sweet jelly bitter
Next: Brazilian woman 1 centimeter away from death : harpoon victim photo