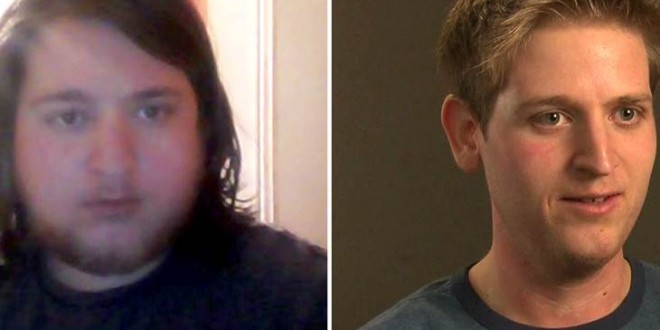 Lucas Irwin shocked his parents over the holidays when he showed up 130 pounds lighter than the last time they had seen him.

Last year Irwin made a resolution to lose weight, but he wanted to keep it a secret from his family, so he turned to the Internet for support. He maintained a strict eating regimen, kept a food diary and started exercising.

“No foods were off limit, but I survived mostly on tuna salad, chicken with salsa, frozen vegetables, beans and rice, turkey/roast beef sandwiches, spinach and eggs,” he wrote on Reddit.
“After I lost 100 pounds I started walking to work (5 miles) for about 2 months until it got too cold outside.”

Irwin’s hard work paid off in his parents’ reactions.

“Hey buddy, how are ya — oh my God!” Irwin’s father Jeff Irwin can be heard saying, with his stepmother Susan Irwin quickly echoing the “oh my God!”

“All of s sudden, down the stairs he came,” Jeff told “Today.” “And he looked just fantastic. I was more stunned than anything else. But inside, I was just beaming. I was just … I was over the moon.”
“Just picturing it in my mind again, it brings back tears to my eyes again,” said Susan. “I am so proud of him.”

Web articles – via partners/network co-ordinators. This website and its contents are the exclusive property of ANGA Media Corporation . We appreciate your feedback and respond to every request. Please fill in the form or send us email to: [email protected]
Previous: Ex-US Marine charged with ‘atomic wedgie’ murder of stepfather
Next: Preemie Crying Linked to Later Behavioral Problems : Study