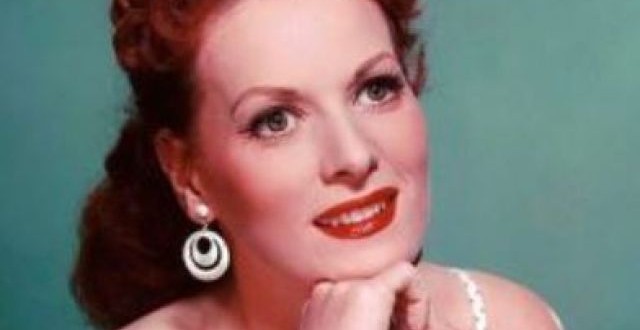 Actress Maureen O’Hara, the Irish beauty who appeared in such classic films as “The Quiet Man” and “How Green Was My Valley,” has died.

Her manager, Johnny Nicoletti, says Maureen O’Hara died in her sleep Saturday at her home in Boise, Idaho. She was 95.

Born and raised in Dublin, she moved to Hollywood to star in “The Hunchback of Notre Dame” (1939) and enjoyed a long, successful career.

President Michael D Higgins said she “will be remembered as an outstanding and versatile actress, whose work especially in film, will endure for many years to come.”

“I especially remember with affection her recent visit to Áras an Uachtaráin,” he added,” when we discussed among other things her great love of Ireland and her strong family links to Shamrock Rovers.”

Her manager issued a statement announcing her passing, and paying tribute to the star of Hollywood’s Golden Age.

“It is with a sad heart that we share the news that Maureen O’Hara passed away today in her sleep of natural causes,” it read.

“Maureen O’Hara was our loving mother, grandmother, great-grandmother and friend. She passed peacefully surrounded by her loving family as they celebrated her life listening to music from her favorite movie, The Quiet Man.”

“As an actress, Maureen O’Hara brought unyielding strength and sudden sensitivity to every role she played. Her characters were feisty and fearless, just as she was in real life. She was also proudly Irish and spent her entire lifetime sharing her heritage and the wonderful culture of the Emerald Isle with the world.

“While we mourn the loss of a very wonderful woman, we also celebrate her remarkable life and hope that it serves as an example to young people around the world, especially in Ireland, to work hard to make their dreams come true and to always have the courage to stand up for themselves.

“For those who may ask what they can do to honor Maureen, we have a simple request: visit Ireland one day and think of her.”

She is survived by her daughter Bronwyn FitzSimons, who lives in Ireland.

Web articles – via partners/network co-ordinators. This website and its contents are the exclusive property of ANGA Media Corporation . We appreciate your feedback and respond to every request. Please fill in the form or send us email to: [email protected]
Previous: Joey And Rory Duo ‘Cancel Tour Dates’ After Joey Stops Treatment For Cancer
Next: James Holmes attacked by Fellow Prisoner in Colorado “Video”