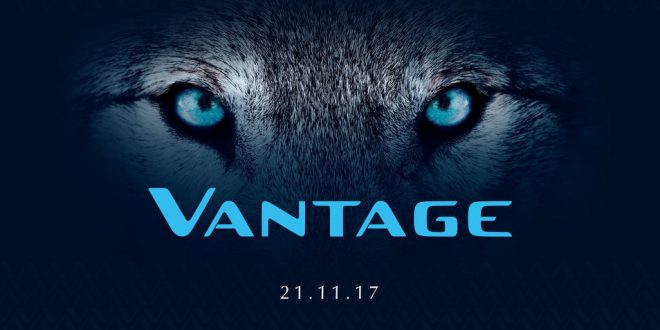 The next-generation Aston Martin Vantage has been confirmed for a November 21 reveal, with the British marque posting yet another teaser on social media.

An image showing the eyes of a wolf with the word VANTAGE emblazoned on top alongside the ’21.11.2017’ date.

Another couple of teaser images have also been released alongside the release date teaser revealing elements of the car’s design.

One of the pictures shows the new rear-light, which displays a new signature design, which debuted a few weeks ago.

A new image also reveals two cars side by side, one with a huge spoiler.

This suggests that, alongside the road-legal customer car, the GTE track car will be revealed.

Other design elements confirmed by the tease are the wide set headlights and bonnet scoop.

The car appears to take inspiration from the Db10 at both the front and the rear of the car.

At the back the lip on the boot looks like the render on the Vantage and spy shots of the car captured a few months ago seem to confirm the wide-set headlights and grille.

The Vantage doesn’t look to be as wide or angular as the DB10 and has a more rounded style.

The new Aston is expected to be powered by Mercedes-AMG 4.0-litre twin-turbo V8 which is used in the Mercedes AMG GT S.

A sprint time off around 4.0-seconds is rumoured for the new car and it should be available with either a six-speed manual or dual-clutch automatic transmission.

We’ll learn more about the car in a few weeks, so stay tuned.

Web articles – via partners/network co-ordinators. This website and its contents are the exclusive property of ANGA Media Corporation . We appreciate your feedback and respond to every request. Please fill in the form or send us email to: [email protected]
Previous: Dinosaur-era shark caught off Algarve coast (Photo)
Next: Dinosaurs Could Have Survived The Asteroid, Researchers Say