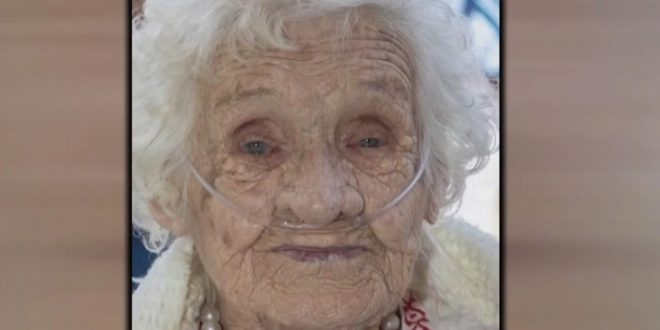 At 105 years old a New Mexico woman has lived through two pandemics, a century apart. Even though she’s tested positive for coronavirus her family says she’s still in good spirits.

“She was four-years-old when the Spanish flu hit,” says Luby Grenko’s granddaughter Misty Tulson. Now at 105 in a Gallup nursing home, she got the news so many people fear, she has the Coronavirus. “It was earth-shattering but it was kind of expected at her age,” said Tulson.

Luby Grenko was born in Gallup in 1914 and when the Spanish flu hit, “It took her mother’s life and her mother was 28-years-old. It also took her baby sister’s life who was a month old,” said Tulson.

Tulson says it’s a time her grandmother hasn’t forgotten, “She said I just remember my mom went to the hospital and never came back,” Tulson says.

After her mom died, Grenko’s family moved to Croatia, where they lived for ten years before coming back to New Mexico. “She is just always the funniest, always the life of the party and just such a joy to be around,” Tulson says.

Tulson says her grandmother’s diagnosis has slowed her down physically but it hasn’t changed her attitude. “She’s singing her little Croatian songs every day and she just prays a lot,” Tulson says.

The 105-year-old isn’t out of the woods yet but her fever and cough are gone so her family is hopeful for her recovery.” “If anyone could beat it. It would be her,” Tulson says. Grenko will turn 106 in August.

Web articles – via partners/network co-ordinators. This website and its contents are the exclusive property of ANGA Media Corporation . We appreciate your feedback and respond to every request. Please fill in the form or send us email to: [email protected]
Previous: Swiss grandparents told they “can now hug their grandkids”
Next: Jared Kushner presidential election: No White House discussions on altering Election Day