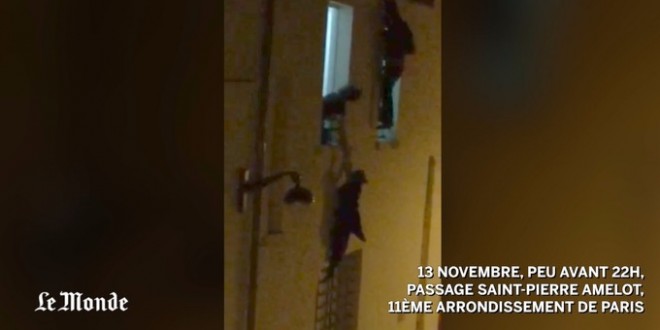 The pregnant woman filmed dangling by her arms from a first-floor windowsill during the massacre at the Bataclan has described how a stranger risked his life to rescue her from a failed escape attempt.

Dramatic footage captured the moment the woman, who has not been identified, dangled from the window and shouted for people running for their lives below to catch her.

Inside, gunmen were taking hostages and killed 89 concert-goers.

A man was seen in the footage helping the woman back inside and he has now told a French newspaper about the incident.

Identified only as Sebastian, he said he saw her as he ran from the killers.

“She was begging people down below if they would catch her if she jumped,” he said. “But it was chaos down there. We were 15 metres above the ground.

“I held on for five minutes and then the pregnant woman, who was exhausted, begged me to help her get back inside. That’s what I did.”

Sebastian also revealed that the terrorists told them they wanted their victims to “feel the fear that people suffer every day in Syria” and warned: “That’s just the beginning. We will massacre the innocent.”

Sebastian and the woman then separated and he was captured by a gunman before eventually escaping when police stormed the building.

The woman is understood to have survived the attack.

Web articles – via partners/network co-ordinators. This website and its contents are the exclusive property of ANGA Media Corporation . We appreciate your feedback and respond to every request. Please fill in the form or send us email to: [email protected]
Previous: Exoplanet HD 189733b Weather Report Reveals 5400 MPH Winds “Research”
Next: Education Management Corporation to Pay $95.5 Million in Settlement