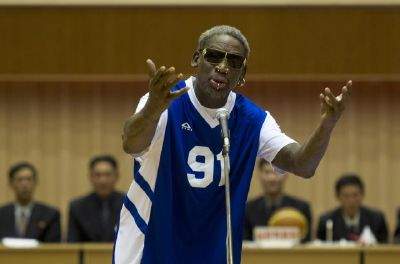 Dennis Rodman, a self-proclaimed friend of the dictator, travelled to the capital Pyongyang with other former NBA stars to take part in a game to honour Un’s birthday, scheduled to be played on Wednesday.

However, a number of the former stars have since claimed to be having second thoughts because of the amount of criticism the game has conjured in the United States.

Here’s the video of the interview. Rodman completely goes nuts at the end of the video, screaming at CNN host Chris Cuomo that he doesn’t “give a f**k” or a “rat’s ass” about what he thinks:

Smith, who played for the New York Knicks, said the North Korea trip has been dwarfed by politics and Rodman’s frequent boasts about his close friendship with Kim.

“What we are doing is positive, but it is getting dwarfed by the other circumstances around it,” Smith told The Associated Press. “Apparently our message is not being conveyed properly due to the circumstances that are much bigger than us, and I think that has to do with politics and government.”
Rodman arrived in Pyongyang on Monday with seven former NBA players and four streetballers for the game on Kim’s birthday, believed to be his 31st. Along with Smith, the squad features ex-All Stars Kenny Anderson, Cliff Robinson and Vin Baker.

The game would be another milestone in Rodman’s surprising relationship with basketball fan Kim, who rarely meets with outsiders and is possibly the world’s most mysterious leader. Rodman has called the game a “birthday present” for Kim but says he has received death threats for his repeated visits to this country and for calling Kim a “friend for life.”

“The way some of the statements and things that Dennis has said has tainted our efforts,” Smith said. “Dennis is a great guy, but how he articulates what goes on — he gets emotional and he says things that he’ll apologize for later.”

The White House said Tuesday it would not have approved Rodman’s latest trip to North Korea if it had any say in the matter. Spokesman Jay Carney said the visit was considered private travel and not subject to government review.

“The NBA is not involved with Mr. Rodman’s North Korea trip and would not participate or support such a venture without the approval of the U.S. State Department,” he said in a statement. “Although sports in many instances can be helpful in bridging cultural divides, this is not one of them.”
Rodman is the highest-profile American to meet Kim since the leader inherited power after his father, Kim Jong Il, died in late 2011. He traveled to the North for the first time last February and came back just before Christmas to hold tryouts for the North Korean basketball team, though he did not meet with Kim then.

The plan to hold the game has been criticized because of the North’s human rights record, its development of nuclear weapons and its threats to use them if a conflict breaks out with Washington or Seoul. Rodman, in particular, has been slammed for not trying to use his influence with Kim to secure the release of Kenneth Bae, an American missionary with health problems who is being held in North Korea on charges of “anti-state” crimes.

In Washington, State Department spokeswoman Jen Psaki said the U.S. remains gravely concerned about Bae’s health and is ready to send U.S. envoy on North Korean human rights issues, Robert King, to seek his release if Pyongyang reinstates an invitation that was withdrawn in August. Psaki declined to say whether Rodman’s visit was complicating those diplomatic efforts.

Asked in a CNN satellite interview Tuesday whether he would raise the issue of Bae, Rodman yelled in response, “I don’t give a rat’s ass what the hell you think. … One day this door is going to open because these 10 guys here.”

Smith placed his arm around Rodman’s shoulder and a hand on his arm in an attempt to calm Rodman down.
“I feel bad for Dennis, I feel bad for the players,” Smith said afterward, adding that when he played for the United States in the 1988 Olympics he felt elation.

“I felt huge, I felt on top of the world. But I feel the reverse now,” he said. “I feel a lot of remorse for the guys because we are doing something positive, but it’s a lot bigger than us. We are not naive, we understand why things are being portrayed the way they are. We can’t do anything about that, if we could we would.

Web articles – via partners/network co-ordinators. This website and its contents are the exclusive property of ANGA Media Corporation . We appreciate your feedback and respond to every request. Please fill in the form or send us email to: [email protected]
Previous: Northern Lights May Expand South : scrubs rocket launch (VIDEO)
Next: James Cameron to shoot 3 ‘Avatar’ sequels in New Zealand