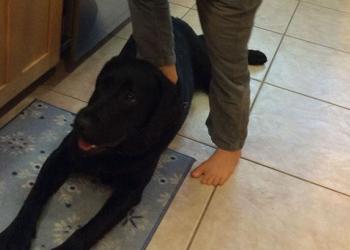 “May 2015 see every stumbling block turned into a stepping stone on the path forward,” Sarah Palin posted in a New Year’s Facebook greeting. “Trig just reminded me. He, determined to help wash dishes with an oblivious mama not acknowledging his signs for “up!”, found me and a lazy dog blocking his way. He made his stepping stone.”

The photos, posted Thursday morning, garnered more than 49,000 Facebook “likes” in less than 24 hours, but also more than 19,000 comments — the majority of which expressed outrage at Palin for allowing the 6-year-old to stand on the dog and voiced concern for the animal’s welfare:

• Why the hell would you allow a child to use the dog’s back to stand on??!! Such irresponsible behaviour and a total disrespectful way to teach children how to treat animals. Totally disgusting. May 2015 teach you to be a better mother and non animal abuser. Disgusting!!!

• Poor dog that’s dangerous.. how stupid and cruel adults are not to teach this child how to respect and animal.

• Ohhhh…. I’m normally in your fan base Sara, but these pictures are disturbing on so many levels. What happens as Trig gets bigger and doesn’t understand this could hurt the dog? What happens as the dog gets older and more sensitive to pressure on his spine? This is a dangerous thing for both your pet and your son. Please stop this now before something horrible happens to one or both of them.

• You are so unbelievable! So sad! Totally wrong! Let me send someone to stand on you, you be the stepping stone!

Web articles – via partners/network co-ordinators. This website and its contents are the exclusive property of ANGA Media Corporation . We appreciate your feedback and respond to every request. Please fill in the form or send us email to: [email protected]
Previous: Taylor Swift Fall – Video: Singer Fall down stairs at NYE show & One Direction shine!
Next: Kendall Bikini – Photo : Star swaps hijab for bikini on tour of United Arab Emirates