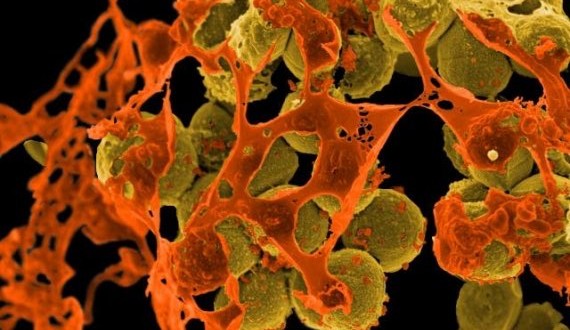 A 1,000-year-old Anglo-Saxon salve of onion, garlic, and part of a cow’s stomach could potentially eradicate the MRSA superbug problem.

Researchers recreated a 9th Century Anglo-Saxon remedy by using onion, garlic and part of a cow’s stomach. While it might not sound too appetizing and you may wonder how it could possibly help fight these super strong bugs, the results actually astonished scientists.

It seems our ancestors knew what they were doing after all. Scientists were surprised to find that this ancient treatment almost completely wiped out methicillin-resistant staphylococcus aureus, otherwise known as MRSA.

The remedy was found in Bald’s Leechbook – an Old English manuscript that contains instructions on various ancient treatments. Anglo-Saxon expert Dr. Christina Lee, from the University of Nottingham, translated the recipe for an “eye salve”, which includes garlic, onion or leeks, wine and cow bile.

Researchers from the university’s microbiology team used the translation to recreated the remedy and then tested it on large cultures of MRSA. They found that the remedy killed up to 90 percent of the MRSA bacteria and believe that it is the effect of the recipe and not any one single ingredient.

“But we were absolutely blown away by just how effective the combination of ingredients was,” Harrison says.

Dr. Lee said there are many books from the same time periods that are similar and appear to address the treatment of bacterial infections. She said this could suggest people were carrying out detailed scientific studies centuries before bacteria were discovered.

The leechbook is one of the earliest examples of what might be considered a medical textbook. It seems Anglo-Saxon physicians may actually have practiced something close to the modern scientific method, with an emphasis on both observation and experimentation.

Bald’s Leechbook could hold some important lessons that could aid in the fight against anti-microbial resistance.

For those of you who are interested in creating your own Bald’s eye salve, the recipe calls for equal amounts of garlic and another allium such as onions, both finely chopped and crushed in a mortar for two minutes. You then add 25ml of English wine and dissolve bovine salts in distilled water and combine the mixtures and chill for nine days at 4 degrees Celsius.

Web articles – via partners/network co-ordinators. This website and its contents are the exclusive property of ANGA Media Corporation . We appreciate your feedback and respond to every request. Please fill in the form or send us email to: [email protected]
Previous: Atlantic Salmon Federation Concerned Government Didn’t Notify Public Of Virus, Report
Next: Suicide reported at Universal Studios Theme Park