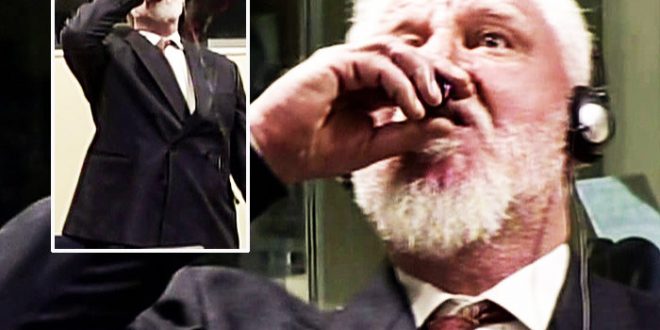 The United Nations court in The Hague has confirmed that a Bosnian Croat war crimes defendant died shortly after taking what he said was poison upon hearing his appeal of a 20-year sentence had been rejected.

A spokesman for the International Criminal Tribunal for the Former Yugoslavia (ICTY), Nenad Golcevski, told reporters that 72-year-old Slobodan Praljak died in a nearby hospital on November 29 despite efforts to save him.

There was no immediate information about the nature of the liquid he drank.

Croatia’s Prime Minister Andrej Plenkovic earlier offered condolences to Praljak’s family, saying at a press conference, “we have all unfortunately witnessed his act by which he took his own life.”

Praljak, a former commander of Bosnian Croat forces in Bosnia-Herzegovina’s 1992-95 war, was one of six Bosnian Croat defendants in court to hear rulings on the appeal of their sentences at the ICTY.

He appeared to take a drink moments after judges at the tribunal confirmed his 20-year sentence on appeal.

“Slobodan Praljak is not a war criminal. I reject the verdict with disdain,” he shouted.

Police, an ambulance, and a fire engine could be seen outside the building and emergency rescue workers went into the court, while a helicopter hovered above the scene.

Agius had overturned some of Praljak’s convictions but left his sentence unchanged.

Praljak, who was sentenced to 20 years’ imprisonment in 2013, was one of six former Bosnian Croat political and military leaders standing before the court.

Praljak was specifically charged with ordering the destruction of Mostar’s 16th-century bridge in November 1993, which judges in the first trial had ruled “caused disproportionate damage to the Muslim civilian population.”

Web articles – via partners/network co-ordinators. This website and its contents are the exclusive property of ANGA Media Corporation . We appreciate your feedback and respond to every request. Please fill in the form or send us email to: [email protected]
Previous: Model Ming Xi Falls During VS Fashion Show 2017 (Video)
Next: Ice Bucket Challenge inspiration: Man Behind ALS Ice Bucket Challenge Dead