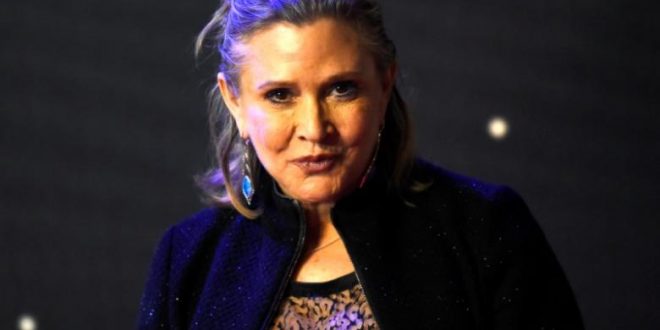 Star Wars actor Carrie Fisher died from sleep apnoea and had drugs in her system, according to a Los Angeles coroner’s report obtained by US media.

The 60-year-old passed away in December following a flight to LA and although it was believed her death was due to a cardiac arrest, the Los Angeles County Coroner report has now stated her actual cause of death was the common sleep disorder, which causes a person to take more pauses and breathe slowly when they sleep, TMZ has reported.

The document has also claimed that there were also other ‘undetermined factors’ which contributed to her death.

Reportedly included in those other factors was heart disease and drug use, although the latter has not been clarified.

It is also believed that on the death certificate the cause of death will remain as undetermined.

This news comes over five months after a medical expert performed an autopsy on Carrie three days after she passed away.

Carrie’s final appearance in the Star Wars franchise is set for a December 15 release in the form of Star Wars: The Last Jedi.

Kathleen Kennedy, the President of LucasFilm Limited, has admitted that Fisher’s passing left the company needing to rethink their plans for 2019’s Episode 9.

‘Obviously, with Carrie having passed away, it shook everybody,’ Kennedy told EW.com before admitting that the creative team behind the Star Wars films decided to change their plans for Leia in Episode 9, in light of Fisher’s death: ‘We pretty much started over.’

It was previously suggested by Fisher’s brother Todd that old footage would be used in the upcoming Star Wars films after the family had given Disney execs their blessing.

However Kennedy shot down those rumours at April’s Star Wars Celebration: ‘Sadly, Carrie will not be in IX. But we will see a lot of Carrie in VIII.’

Web articles – via partners/network co-ordinators. This website and its contents are the exclusive property of ANGA Media Corporation . We appreciate your feedback and respond to every request. Please fill in the form or send us email to: [email protected]
Previous: Oops! Facebook Accidentally Exposed Its Employees to Suspected Terrorists
Next: Antarctic ice melt tied to El Nino warming, finds new research